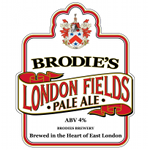 Epping and Ongar is a heritage railway line, running trains along a short stretch of track beyond Epping out towards, you guessed it, Ongar. Ongar station was formerly the far eastern extreme of the Central Line, the tube line that passes nearest my flat, but the route between it Epping closed in 1994. While some trains started running in 2004 the line ceased operation again and has since opened as a heritage railway, currently running diesel and stream trains between North Weald and Ongar stations. They also run vintage buses to and from Epping station. No, the bus on the left is not levitating

My mate Alan volunteers at the railway and one day, after a Whisky Squad session, asked if I’d come and work at his beer festival. He said it involved trains and I agreed, not really thinking about where it was. Which is how I found myself on Hanger Lane station preparing to travel almost the entire length of the Central Line early on a Saturday morning.

The beer festival went rather well, although the hot weather of the last week almost caused issues. The beer ‘tent’ was a metal shed on the side of the main engineering shed for the railway, and the week of sun heated it up like an oven – dark green outside and white inside, it was almost as if that was the intention. Some careful work by the beer team, an air conditioning unit, some ice packs and occasional hosing down of the tea-towel covered casks made sure the beer was kept appropriately cool, and it remained so through the weekend.

As it was a more traditional CAMRA festival the beers were in the main rather different in character from the hop-laden IPAs that I usually end up drinking these days, but they did remind me that not all ‘boring brown beer’ is boring – I now need to investigate the Crate brewery and seek out more beer from ELB. However, it was, inevitably, the hop forward beers that caught my eye, especially as it was a tad warm outside. The Brodie’s Citra was a bit green for my liking, but packed full of flavour despite its 3% abv, so I grabbed the other for my last drink of the week – Brodie’s London Fields Pale Ale.

It poured incredibly pale (weak lemon squash) and very hazy – in the end credited to it being unfined rather than their being any problem with the cask. On the nose it’s got lots of sour grapefruit, with a touch of sour green hop and unsweetened lemon barley water. To taste it’s very sour, with lots of fresh grapefruit juice, bitter green leaves and some nutty yeastiness. It finishes with lots of green, bitter hops, sour lemon and a touch of bitter, smoky roasted/charred malt.

A grapefruit heavy but dry beer with a tang that hinted at a sour, and thus reminded me of the excellent Brodie’s blueberry sour that I tried up in Edinburgh last weekend. Late in the afternoon I wandered out from behind the bar, a half in my hand, and sat in the shade of one of the buses for a bit of a rest, occasionally poking my head into the sun, and it was the perfect beer for the moment.

A great festival, but now I smell of beer and really need a lie down…

Brodie’s London Fields Pale Ale
London Pale Ale, 4%. £3.50 a pint at the festival. Same as all of the other beers. Bargain.