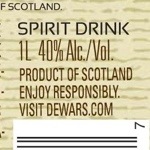 An issue that’s popped up recently in the whisky blogging/whisky geek world is labelling. It pops up from time to time anyway, but with announcement of Dewar’s Highlander Honey earlier this year, and more recent notice of Knob Creek Smoked Maple, it’s definitely at the forefront of many brains, my own included. As ever, I’m in two minds, so this is an attempt for me to work out what I think.

Firstly the issue in a nutshell: different countries have different labelling requirements when it comes to different categories of drinks, and we don’t know which is best.

The two places that I’m going to focus on are the UK and the USA, as they’re the ones that I have some clue about. When it comes to whisky, in the former the people behind many of the regulations are the Scotch Whisky Association (SWA) – they’ve lobbied for the current legal framework and are the people who will start suing if regulations aren’t followed. In the USA the folks who do label approval are the TTB – The Alcohol and Tobacco Trade and Tax Bureau – before you can release a product you need to submit your label to them for approval, to ensure that it fits in with the failry complicated rules.

The aim of both organisations when it comes to labelling is to ensure that all of the legally mandated information is on the label (ABV, etc), no illegal information is present and that the product in the bottle isn’t misrepresented. It’s this last piece of the puzzle that is most interesting to me, as the SWA and TTB have quite different approaches.

The SWA take a very hard line over what counts as whisky. From their threats to Compass Box over their ‘non-traditional’ plans of inserting extra new oak barrel staves into maturing casks, to grumblings over brand names that might imply a whisky produced at a non-existent distillery (Glen Oren, Glenbridge, Port Askaig) with a whole host of other infractions in between, they take no prisoners. One of the main ways that they enforce the rules is to ensure that the word ‘whisky’ doesn’t appear on bottles that aren’t legally whisky, no matter if they were made using whisky or not.

The TTB take a more pragmatic approach, allowing labels much more leeway in using proscribed terms, as long they describe what’s in the bottle. This has led to issues with companies such as Amrut and The English Whisky Company, who don’t fall under the Scottish exemptions to certain rules and thus aren’t allowed to label their liquid whisky – they don’t use new charred oak casks to mature their spirit, as US law generally demands. However for products with whisky as an ingredient this allows the word ‘whisky’ to be used on labels even if the final product itself isn’t classified as whisky – as long as it’s made clear that it’s not claiming to be whisky then things are usually fine.

The earlier mentioned example of Dewar’s Highlander Honey is a case where the TTB and the SWA disagree. Dewar’s submitted their label to the TTB and at the same time passed it to the SWA for comment, looking towards a potential release in the UK as well as the planned US one. The label says on the front ‘Dewar’s Blended Scotch Whisky infused with Natural Flavours’. As expected the TTB allowed it – the label states that it is whisky with extra ‘Natural Flavours’ and was submitted to them as a ‘Whisky Speciality’ rather than simple a whisky. However, quite surprisingly, the SWA also said that it would be fine.

In the UK the regulations state that you can’t use the phrase ‘Blended Scotch Whisky’ on the bottle if it’s not a bottle of Blended Scotch Whisky. The Highlander Honey may be a blend of Blended Scotch Whisky and other flavours, but in order to ensure that there is no confusion they are not allowed to mention the whisky on the label. The designation for such a product, if it falls outside of the quite strict rules for a Whisky Liqueur, is Spirit Drink. Hidden on the back label of the Highlander is that term, sitting above the barcode along with the legally required ABV and bottle size.

After there was some talk about the Highlander Honey online, and presumably a lot more amongst the various companies that make up the SWA, they changed their minds. This at first appears to be a victory for labelling regulation, stopping a product that could be confusing to the consumer from reaching the market, but I see it as a little more nuanced than that. The key to my thinking is the term ‘Spirit Drink’.

When it comes to deeply unsexy terms in the spirits marketing world, Spirit Drink must be close to the top of the list. “Can I get a large Spirit Drink” is not a term that will trip off the tongue of anyone ordering a drink in the pub. While it may protect consumers from confusion, it seems to do so by stopping the potentially confusing products hitting the shelves, as noone wants to try and market something as a Spirit Drink – if the only allowable connection to whisky that Dewar’s Heather Honey is allowed to list on the label is the name Dewar’s, relying on consumers already knowing that Dewar’s is a whisky, then that immediately makes it a lot harder to promote in the already crowded drinks market.

However, on the US side of things we go in entirely the opposite direction. Despite the money poured into education by the brands, consumers still don’t know all about the drinks they are consuming and, understandably, don’t want to – they’re mainly concerned with whether the drinks taste nice. If people see a bottle saying ‘Blended Scotch Whisky infused with Natural Flavours’ then the majority of them will almost certainly assume that it’s whisky. I have nothing but anecdote to back this up, but receiving daily comments at work calling Fireball and a variety of other whisky liqueurs ‘whisky’ assures me that it’s probably a fairly accurate assumption.

While the TTB allow honest descriptions of what the contents of the bottle is, most consumers aren’t educated enough in the world of drinks to necessarily know what that means. While my first thought is to say ‘Caveat emptor’, part of my brain realises that giving consumers without specialist knowledge the hints that they need to buy the correct product is a good thing.

So, what’s my solution? I don’t have one. Ideally it’d be somewhere in the middle, but this is a fairly polarised situation and there isn’t an easily visible centre path. In the end I only have my impossible dream – a US style system but with consumers educated to the point that they understand what they’re drinking. The lack of concern that most consumers seem to have about the legal definition of what it’s in their bottle means that in the main it seems that the people most concerned by the naming regulations are geeks like me and trade organisations like the SWA, protecting their members interests by stopping other products from being passed off as being like theirs.

As usual in the end it’s the consumers who bear the fruits of the policies, either due to ignorance about what they’re putting in their mouths or by being denied the chance to try the drinks falling foul of the regulations. On balance I think that I’d rather be ignorant and unconcerned but have more tasty things to drink.

As ever, please let me know if I’ve got anything in the above wrong – my knowledge of labelling regulations is far from deep, but the above is based on my understanding of the issues

6 Replies to “Labelling, Categorisation and Other Boring Things”