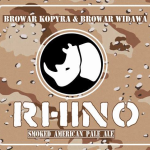 One of the great things about the European Beer Bloggers Conference was that despite its presence in the UK for the third year in a row, there was definite representation from all over Europe. While much of the continent is known for its yellow fizzy beer, more interesting beer is starting to make itself better known and one of the people leading that charge in Poland is Tomasz Kopyra.

Tomasz had the fairly unique status at the conference of being someone who has taken the leap from blogging about beer as a hobby into it being his job. He now works full-time on beer, with his blog posts and videos attempting to dispel myths about beer in Poland as well as offering interviews, reviews and opinions. He’s also stepped up his home brewing to the next level as well, partnering with local brewer/restaurant Browar Widawa to make his beers on a slightly larger scale – you can find more about Widawa over on Thomas’s site.

He brought along a few bottles for us to try, and we kicked off with Kuguar, Polish for Cougar. It was brewed by Browar Widawa, with Tomasz listed as providing the recipe, and it’s a classic American style IPA, hopped with Mosaic and Zeus. On the nose it had a green bitterness balanced by some pine and fruit – fizzy lemon and unripe mango. To taste it started with sour fruit giving way to leafy bitterness and some sharp lemon and lime underneath, as well as a touch of soapy hop. It finished with mulchy bitterness and bitter orange zest.

The second beer he brought was Rhino, a more recent release, now listed as a collaboration between Browar Widawa and Browar Kopyr. It’s a smoked IPA and I was quite surprised to hear Tomasz recommend it as a refreshing beer in hot weather. It poured very hazy and on the nose there was a big hit of sweet cured bacon and sweetcorn – lots of sweetcorn. The smoke and corn was pretty impenetrable, but there was a hint a of citrus lingering underneath. On the palate the smoke was strong but not overpowering, revealing soft malt and gentle hop bitterness, as well as lots of grapefruit tempered with some apricot and peach. It finished with some sour fruit hoppiness and a little bit of smoke. I really liked it and he was right – a great beer for when it’s hot out.

You can find Tomasz writing in English on BeerGuide.pl and in Polish on blog.kopyra.com.