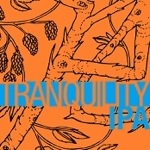 The Moon Under Water has been a brewpub for a few years, but its recent history started when it was taken over and refurbished last year. The new brewmaster is Clay Potter, a young veteran of the BC brewing scene and graduate of both the University of Victoria (biochemistry) and Heriot-Watt in Edinburgh (brewing and distilling), who worked at both Lighthouse and Turning Point before striking out on his own. He took over the pub with his fiancée, step-father and mother, and together they have breathed new life into the place.

They released their own beers at the end of 2012 and when I visited in January 2013 they were still a bit of an unknown quantity amongst the locals I spoke to, although reports where very good. Unfortunately I didn’t make it over to the Moon Under Water during my time in Victoria, so I can’t say how closely it conforms to Orwell’s ideal, but I did manage to grab a bottle of their beer from the well-stocked fridges at The Strath. I’m not entirely sold on the label

I went for the Tranquility IPA, having heard that they were a progressive brewer with a west-coast bias. On a bit of further reading I discovered that they actually focus on German style beers with a new-world twist, and the Tranquility seems to be the exception to the rule – the rest of the regular line up includes a Pils, Dunkel and Weizenbock… Never mind, I’m always happy to try a new IPA. They use Canadian malt to make the beer, hop it to 70 IBUs and bottle it unfiltered. Despite the pile of sediment in the bottom it pours very clear (the bottle has been settling for several months since it was shaken around in the hold of the plane on the way home) with a light head that dissipates quickly and a light fizz on the palate. On the nose it’s malt heavy, with a touch of floralness (more scented polish than hops) and bitter orange peel. To taste it kicks off with some musty malt and orange peel, before settling on a fruity malt driven middle made more interesting by some touches of tropical fruit (dried and green mango, watermelon rind, maybe some sour pineapple) and with a heavy green bitterness. It finishes with a quick burst of floral hops, coriander seeds and cracked pepper, before lingering with intense green leaf bitterness.

This is certainly no west-coast hop bomb, but is nicely weighted and shows every one of its IBUs. Bitter, lightly floral and not hiding its malty centre under a veil of hop. I am intrigued to see what they do with German-style beer – another reason to visit Beautiful British Columbia again.