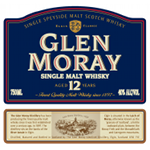 I’m not very good at opening whisky. The physical act itself, of ripping foil and pulling corks, is something I have some skill in, but the mental shove to actually open a bottle is often beyond my grasp. Every time I reach for a sealed bottle a tiny voice in my head asks me if I’m sure. ‘Will you be able to get one of those again? Is that the last of it? Shouldn’t you save that for a special occasion?’. More often than not I put the bottle down, but a few nights back I decided crack open one of the more unique bottles in my collection – a hand filled bottle of Glen Moray, filled by me when visiting last year. It was from a cask sat in the visitors centre, inevitably finished by now, and is not the kind of bottle that people normally keep and sell on. When it’s gone, it’s really gone. It’s very nice and reminded me that I’ve not mentioned them on the blog, an oversight I now hope to correct.

It’s not easy visiting whisky distilleries if you don’t drive. While the bus and train network in Scotland is an impressive thing, the general positioning of distilleries away from the middle of towns, a combination of factors ranging from danger of explosion to the likelihood of being found by the exciseman, means that to get around to visit them you generally need some kind of private transport. However, being a soft handed city dweller whose ten driving lessons taken at the age of 18 were ten hours of ritual humiliation and near death experience, I have never got as far as having a driving license. Fortunately, there are some distilleries that are more favourable to those relying on public transport, amongst them Glen Moray in Elgin. While Dufftown is seen as the centre of Speyside, with its famous seven stills to rival the hills of Rome, it is Elgin, to the north, that governs Moray, the county that encompasses most of the whisky producing region. The town itself is surrounded by distilleries but there is only one that sits properly within its boundaries, with a westerly walk down residential streets eventually rewarded by the sight of a tall black building with a rather industrial looking chimney. Once past their garden, Glen Moray is not the most romantic looking of distilleries.

Starting off as a brewery in the early 1800s, Glen Moray became a two still distillery in 1897. That didn’t last long and with the owners focusing on their other distillery at Aberlour the plant ran down and closed in 1910. It was then bought  in 1920 by Macdonald and Muir, later known as The Glenmorangie Company. Glen Moray remained the company’s second distillery for over 80 years, until they were sold in 2008 to La Martiniquaise, makers of blended whisky Label 5, popular on the continent but almost unseen in the UK. Up until the 1970s they malted on site, producing malted barley for both themselves and Glenmorangie, storing it in the now mostly empty malt barn. They still have 18 malt bins that can hold 70-80 tonnes of grain, but with around 20 7.5 tonne mashes per week and more regular grain deliveries than in the past they don’t need all of them filled any more.

Since the late 1980s they’ve been operating 24 hours a day, producing over 2 million litres of spirit a year, most destined for blending. Glenmorangie’s move to focus on single malt production seems to be in part behind their decision to sell Glen Moray, but the distillery has also had a single malt available for years. Unfortunately it has often been seen as a cheap supermarket brand, but since being acquired by La Martiniquaise things are starting to change. The distillery’s focus is now shifting towards single malt, with surplus whisky being funnelled into the company’s blends and cask trading rather than those being the main reason for the distillery’s existence. In the 1970s Glen Moray upgraded from being a one wash, one spirit still distillery to a two-by-two producer. However, thanks to the increased needs from their new parent company, that was still not enough and space was earmarked for another pair of stills, installed in December 2012 and commissioned in January 2013, increasing their capacity to 3.3 million litres of alcohol per year. Along with La Martiniquaise’s other Scottish distillery, the excellently named Starlaw, this should happily keep mainland Europe in Label 5 while allowing the Glen Moray brand to grow. The increase in advertising for Label 5 suggests we might even see it on the shelves on this side of The Channel.

Their position as the place where Glenmorangie did their experiments has left Glen Moray both some interesting casks and a slightly adventurous attitude. Happily, it looks like that is being supported by the new owners. More traditional expressions like the recently released 25 year old Port Finish are joined by Chardonnay matured drams and, in a quite serious departure from the norm, a 2 year old peated spirit, evidence of the 10% of their production that uses 40ppm barley. It’s still a slow march from their previous status, but they are moving away from a sole focus on the mass-market. While the Glen Moray Classic is still a supermarket mainstay, their 12 year old is very much a step up. On the nose there’s porridgey grain, cream, vanilla and coconut – classic bourbon cask matured whisky. On the palate the porridge is joined by a touch of citrus, although a touch of young spirit also sneaks in. It finishes with cream and vanilla, undistinguished but a solid drinking dram.

Their more experimental drams are more interesting, with the 10 year old Chardonnay cask my first exposure to the distillery’s more playful side. The fully matured 10 year old Chardonnay, rather than the finishes they have produced in the past, is a more farmyard tinged version of the 12 year old, and I wrote about it a while ago. In short, if bottled with a bit more oomph it could be really rather impressive.

My favourite of their recent releases is very much a sign of things to come. I took it along to the Whisky Squad 3rd birthday as one of my pair of entries in the ‘who has chosen the best whisky’ competition and have already waxed lyrical at work about it – Glen Moray’s Peated Spirit. Presented in a rather small 20cl bottle, it punches a bit harder than its diminutive size suggests. The nose is hammy with cocoa powder underneath, but balanced by a hefty chunk of minerality and swimming pool chemical notes. To taste it’s got rich chocolate and coffee as well as fruit, medicinal peat and a rolling fire of smoke and alcohol heat that is calmed by a drop of water. It finishes with chocolate cake, coal and chlorine, lasting much longer than its two years of maturation has any right to demand. And finally, my reason for thinking about Glen Moray recently – my hand bottled whisky. Bottle 185 from first fill bourbon cask #6499, filled in 1998 and bottled on February 23rd 2012, almost certainly at 13 years old, at an ABV of 58.6%. On the nose it has the creamy porridge note of the 12yo with extra cinnamon spice and a chunk of fruit – apples, pineapples and maybe a hint of papaya. On the palate the fruit theme continues, with more sharp apple and apple skin, a touch of tinned pineapple, some milk chocolate and dry wood behind it all. It finishes with cream and spice, apple skin and biscuity wood. More straight-down-the-line bourbon cask, but with much more intensity of flavour than the 12yo.

In the end Glen Moray is an underestimated distillery by many single malt drinkers and probably justifiably so. I’m not normally one to complain about bottling strengths, but Glen Moray seems to do much better with less dilution, which makes it frustrating that their regular bottlings are done at 40% – a few 46% releases in the line-up and potential might be seen by a wider audience than just visitors to the distillery. However, with the freedom that La Martiniquaise has given them there have already been indications that things won’t stay the same. I look forward to what they come up with next.

Thanks to Iain and Emma from the visitor’s centre for looking after me when I visited, and to distillery manager Graham Coull for showing me around. You can find details of their tours, including tutored tastings with Graham, up on their (soon to be updated) website. Their café is also worth a visit on it’s own if you’re over that side of Elgin – the distillery is only a 15 minute walk from the station.