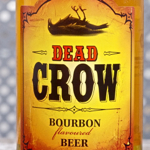 I should not be allowed to wander the fabled halls of my local Asda. While I find the place strangely relaxing it has two very specific areas that I find particularly dangerous – the toys aisle, well stocked with affordable Lego, and the drinks section. Every now and again there’s a product that stares at me as I walk past, daring me to buy it whenever I visit. While sometimes that leads to happiness, such as with the Bowmore Small Batch Reserve and Jeremiah Weed Sour Mash Brew, other times there is much potential for peril. This evening was one of those times – I finally gave into the siren call of Dead Crow Bourbon Flavoured Beer.

As I shutdown my office computer for the weekend I noticed on Twitter that it was National Bourbon Day, something that I’d not otherwise heard about, and had plans to sit down this evening with some nice whiskey and finish up a blog post or two that I’ve been writing about the spirit. However, an ill-advised trip to the supermarket has pushed that to next week, and left me with some Tic-tacs, two Lego minifigs (Series 10 has recently come out) and a 4-pack of a beer with the word ‘flavoured’ on the label. It’s rare that something good comes out of a product that uses the word ‘flavoured’ in its description.

Dead Crow is made, according to the bottle, by Beverage Brands of Gloucester. A bit of googling shows that they are now called SHS Drinks and are somebody that any brightly coloured, Ready-To-Drink drinker should be aware of – they are the makers of WKD. While I am a snob when it comes to my drinks, I do occasionally like to indulge in the world of the filthy beverage and WKD is an easy to find entrance into that world. They taste of sugar, artificial colours and shame, and I’m happy to admit that I am an occasional fan. If it’s a night when I’m drinking WKD you’ll either find me sweating while slowly moving from foot to foot on a deserted dance floor, or sitting alone and crying in the corner of crowded pub. Or both. It doesn’t happen very often.

On the nose it’s very sweet and fruity but with a hint of artifice, as well something sour and slightly unpleasant underneath – a bag of Haribo Super Mix sat near the bin? On the palate it’s massively cloying and has the same Haribo fruitiness as the nose. Along with that there are non-fizzy Happy Cola gummi chews, pink shrimp sweets, Nutrasweet-laden lemonade and some bitter green herbiness. The finish is thankfully short with a hit of pleasantly hoppy and bitter lager dosed with some own brand lime cordial.

Worryingly this is not the downright failure that I thought it might be, with there actually being some bitterness hiding underneath the layers of fruity sweets. However the ‘bourbon flavoured’ part of the name is based on no bourbon-like drink that I’ve had before. I suspect I will drink all four bottles and sort of enjoy them, although doing so in one night does hint towards a future involving diabetes.

I see great things in Dead Crow’s future – Desperados better look out, there’s a new filthy, flavoured beer on the market and it’s got a dead animal on the label.