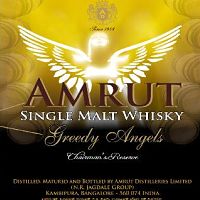 I like whisky festivals. In the last few years the numbers of festivals popping up around the country has grown and much of the thanks for that must got to The Whisky Lounge. I’ve been attending their shows as a punter since their first London festival back in May 2010, and have since progressed to helping at them, both for work and for the The Whisky Lounge themselves. My main problem with working at shows is that I don’t usually get a chance to try many whiskies, as I’m generally behind one of the stands. However, I sometimes get a chance to have a roam and taste a few bits and pieces and Saturday, at the first Bristol Whisky Fest, was one of those times. One rather special dram even got me to break my ‘no writing notes at shows’ rule – Amrut Greedy Angels.

I’ve written about Amrut before, but the key thing about their whisky making when talking about the Greedy Angels is something hinted at by the name – the Angel’s Share.

The climate in India is very different to Scotland and evaporation from maturing casks is higher, about 12% per year as opposed to Scotland’s relatively sedate ~2%. As such leaving whisky in the cask for a long time quickly becomes a physical impossibility: Based on a perfect 12% evaporation per year1, after 5 years you’ll have lost almost half the liquid in the cask and after 18 you’ll be down to 10%. By the time you hit 30 years old a cask initially filled with 250 bottles of spirit will be down to just 6. Add to that the concentration in flavour of the remaining spirit and the climate’s tendency to help the spirit extract even more flavour from the wood of the cask than in Scotland, and you have a situation where you need to bottle whisky comparatively young or risk having only tiny amounts of overly woody liquid left.

Greedy Angels is Amrut’s oldest whisky yet, bottled at the grand old age of 8 and matured in a pair of ex-bourbon casks, numbered 2800 and 2864. They managed to get 86 litres out of the casks, leaving 274 litres to the angels. With 144 bottles released at 50% ABV this gives us an original cask strength of about 58% and an approximate yearly loss of 16.5% – although that does include liquid pulled from the cask for sampling.

The first people who got to try the whisky were visitors to Amrut’s stand at last year’s Whisky Show. Which I helped organise. And was at every day. Unfortunately, I was hidden away in the back running masterclasses and didn’t manage to get out to the Amrut stand to try the mysterious whisky, despite being told I had to by almost everyone I spoke to. They poured it without revealing any details and were rather pleased with the feedback – there are a bunch of tasting notes up on their site. Nine months later it has now been released, although tracking down a bottle is going to be hard work – 144 worldwide doesn’t give any retailer more than a few. Not even TWE.

On the nose it had fresh, sharp apricots, stewed gooseberries, sweet dried and fresh unripe mango, pungent orange skin, Nice biscuits, spicy grain and an underlying Bovril meatiness. To taste there was spice up front that quickly fell back to reveal lots of fruit – citrus peel, green banana, candied papaya, sour mango and dried pineapple. There was also some spiced custard, gummi fruit and a vein of sharp, dark oak running through the middle. It finished with damp oak and apple skin initially, with sweet tropical fruit lingering after that faded.

An impressive dram and a testament to the skills of the folks running the warehouses at Amrut. I suspect these two casks were carefully looked after during the eight years in their care and it was definitely worth the effort. Hopefully they’ve got a few more old casks hidden away…

Many thanks to Ashok Chokalingham from Amrut for letting me have a taste. There was some stiff competition from some of the other stands, but he should be in the running for the Fest’s Dram of the Day award…

1Predictably, I made a spreadsheet to do the calculations – it’s on Google Drive. Let me know if it looks wrong.