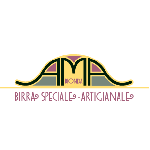 I looked at my beer shelf the other day and realised I’ve been neglecting some of the interesting bottles. One that looked especially accusing was a beer that I picked up at the Great British Beer Festival last August, part of my now traditional (I’ve done it twice) drunken buying of decent Italian beer. I managed to write about a couple of the bottles I picked up at the show in 2011 (Imperial Ghisa and Bastarda Rossa – best beer name evar) but I’ve still got a couple sat on the shelf from 2012. I thought I’d start with the prettiest looking – AMA Bionda.

It seems that more people are realising that interesting Italian beer isn’t a myth and the fridge on the Bières san Frontiéres stand was pillaged early. I have a vague memory of the friendly Italian guy who talked me through the remaining beers saying something about the AMA Bionda being a collaboration, but I may have been slightly tipsy at the time. However, there was a slight strumming of recognition as I read more about the beer. AMA Bionda is brewed by Birra Amarcord at their brewery in Apecchio, a small town about halfway up the calf of the boot of Italy and not too far to the south of the tiny country of San Marino. They moved to Apecchio in 2008 having started out in the 1990s in Rimini, a town on the coast to the north on the other side of San Marino. They named the business after Fellini’s film of the same name, which is based in Rimini.

I’ve not seen any of their other beers in the UK but it seems that a few of them have got as far as the USA thanks to the Brooklyn Brewery, who are partly responsible for the AMA Bionda. Amarcord got to know Brooklyn brewmaster Garrett Oliver and worked with him to produce the AMA range, three bottle conditioned beers to compliment Italian food – Bionda, Bruna and Mora. Bruna is a medium dark 6.5% beer intended for main courses and Mora is a dark 9% beast designed to pair with desserts. This leaves Bionda as the lightest beer of the bunch, paired with seafood, starters and light pasta dishes.

My comment about it being pretty is backed up by actual experts. The AMA logo was designed by Milton Glaser, better known for creating the I ♥ NY logo that you can find adorning almost every tourist bought t-shirt, hat, bag, scarf and pair of underpants that comes out of New York City. While I should dislike him for that, and the fact that a local variant is now plastered on every tat selling cart in central London, I will forgive him thanks to the AMA logo. That and a secret desire to wear a I ♥ NY hat.

In regular Italian craft beer fashion there is a list of details on the bottle:

So, AMA Bionda is a honied ale with a mix of lighter and full bodied malts, and some lightly spicy, medium alpha acid hops. Sounds interesting:

Nose: Dry and grainy with a touch of crystallised honey sweetness

Palate: Thick and sweet, with lots of malty grain, nutmeg spiciness, a touch of sweet butter, syrup and floral honey, with some green hop bitterness coming in towards the end.

Finish: Sweetcorn and sweet oil, with a pleasant green bitterness that lessens as the beer warms

When I first started drinking it, just out of the fridge, I wasn’t too keen – the nose was quite dead and had more than a hint of boring tinned lager to it. The taste was better, but as it warmed up it picked up more complexity, with the floral tones of the honey coming through. However as the beer sat in the glass and got a bit warmer it lost a lot of its bitterness while getting a bit cloying. So, it’s worth following the ‘serve at 6-8ºC’ instructions and not a good idea to get distracted reading about San Marino when you’re meant to be drinking a beer…

Amarcord AMA Bionda
Belgian Style Ale (according to the internet), 6%. ~£4 for a 355ml bottle if my drunken memory is not failing me too badly

2 Replies to “AMA Bionda from Amarcord and Brooklyn”