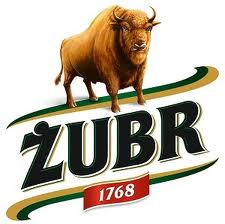 It’s been a while since I’ve investigated the shelves of my local shops for interesting beers. So, when a feeling of bone-level weariness after two days of Whisky Live London and an all-consuming hunger dropped me into a nearby Chinese restaurant to grab some takeaway dinner, I took the opportunity to pop into the shop next door to see what beers they had. At first I thought it was all the same old range of Lech, Tyskie and energy drink-alike cans of Redd (which are on the list to try, despite them looking nasty), but then I noticed an old standard that I’ve not yet tried – Żubr. Not only did they have regular green tin Żubr, but also the more lightly ABV’d Zubr Classic, so a pair of shiny beer tokens were handed to the shopkeeper and I returned home to put them through their paces. Cans slightly beaten up, as is tradition

Using my ‘incredible talent’ with the Polish language I have translated the name – Żubr is the Polish bison that appears on the can, which I guessed from Żubrówka’s bison grass infused vodka. The beer is brewed by SABMiller through their Kompania Piwowarska subsidiary. They picked up the brand when they bought the Białystok based Dojlidy Brewery in 2003 and now brew Żubr there as well as in their other two Polish breweries. It’s the second biggest selling beer in Poland, coming in behind Piwowarska’s Tyskie, and has popped up in the UK despite, I suspect from the lack of English on the cans, not being imported ‘officially’.

As is right and proper, their TV advertising involves animated buffalo. Humming…

I started off with the Classic. It poured initially quite lively, but that quickly disappeared leaving a a flat amber beer with a speckling of head and only a little bit of fizz. On the nose it was pretty good, with a nice bitter hoppiness, but on the palate it quickly fell down – nasty minerality, not a lot of anything else apart from CO2 sourness from the remaining bubbles and a slice of sweet graininess. Fortunately the finish was quick and left nothing but a strangely buttery note that hung around for a little while. While this can doesn’t have any english on it, other than the words ‘Premium Quality’, it does have ingredients lists in a stack of eastern European languages (and, naturally, Japanese) and something about the Czech Republic, which makes me think this is a lower strength export version of Żubr, generally circulated around the former Soviet states. And Japan… Update: It’s actually made in the Czech Republic rather than Poland. It’s produced by Pivovar Prerov and doesn’t even seem to be anything to do with the Polish company – thankyou to the commenty people for letting me know.

The Polish Żubr poured a lot more lively than the Classic, and while the head collapsed quickly it still had enough fizz and left some lacing on the glass. On the nose it was similar to the classic, but had more maltiness and a touch of sweetcorn, as well as a bit of weight from the extra booze – it comes in at 6%. In the mouth it has a bit more body thanks to the higher alcohol, and has a nice balance of hop bitterness and dry malt – oatcakes, green hop and a touch of corn again. It sits around on the finish, with a decent sweet/bitter balance and a touch of corn sweetness. A decent quaffing lager that has definitely replaced Lech as my number two Polish can of choice. As yet the powerhouse that is Żywiec sits happily at the top of the league table, despite my local shops no longer carrying it…