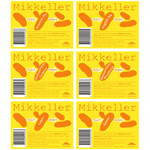 As is traditional for me on St Patrick’s Day, I entirely ignored St Patrick’s Day. I live next door to Diageo HQ, on the site of the old London Guinness factory, saw their murky green dyed lake when I looked out of the window that morning and put on my novelty Guinness hat for 10 minutes, so I think that counts as joining in. However, during the day I went to investigate something a little more interesting – the Mikkeller Yeast Series 2.0.

Last week there was talk in the Whisky Bloggers Facebook group about grain, yeast and their effect on the flavour of whisky, with my opinion being that part of the skill of the brewer is using the tools that they have to create a consistently flavoured wash, so that the new make spirit is similarly consistent and distillery character can continue – ie. barley and grain do make a difference but brewers tweak the process to create an ongoing flavour profile. However, in the beer world there is no distillation and maturation step, with grain and yeast choices being made much closer to the final finished project. And then, as if by magic, a blog post from BrewDog showed up trumpeting that they’d have the latest run of Mikkeller’s Yeast Series in their bars over the weekend – a range of beers only differing in what yeast was being used.

Of course, it’s not quite that easy, different yeasts like to ferment at different at temperatures and speeds, but other than that everything was kept the same to as to produce six pale ales with the same ABV but differing flavours. The six yeasts in question were: Lager, British Ale, American Ale,  Saison, Brettanomyces Bruxellensis and Brettanomyces Lambicus. First up was the Lager yeast, which as my first beer of the day I used as a baseline for flavour. It was a straight down the line hoppy ale, with spice, sour fruit, a bit of ginger down the middle and a lingering syrupy sweetness. It had quite a lot of green hop sourness and a touch of ginger nut biscuits. A bit too hoppy to be a beer that I’d want to drink much of.

Next was the English Ale, which was slightly hazy. It was softer in flavour than the Lager, with orange peel, ginger and less green hop. The lack of greenness revealed more spice and malt, with a touch of spiced spongecake helping to balance the still high levels of bitterness. The touchstone flavour was orange peel – bitter oranges with a touch of pith. All in all not that much different to the Lager.

Third was the American Ale, the point at which the beers started to rapidly diverge. It was stacked with fruit and also veered towards a more Belgian ale flavour than the traditionally hoppy American IPA side of things. It had a rich yeasty flavour at the back along with pineapple, green mango, some pungent cidery apples and some spiced syrup – cinnamon-ish. Very different from the first two.

Next was the Saison, which poured rather flat and headless in comparison to the others, which all had quite nice lacing. It had spicy vanilla up front, along with sweet apple (almost tarte tatin-like) and lots of malt in the middle. It finished slightly sour with a hit of sweetness that reminded me of R Whites lemonade, back in the days before they used sweetener in it. A progression from the American Ale, with loads more spice.

The last two beers both used Brettanomyces yeasts, aka Brett. They’re often thought of as creators of off-flavours, but are also responsible for the distinctive character of many wines and beers, especially spontaneously fermented ones such as Lambics. Mainly they’re known as wild yeasts, ‘used’ by leaving wort in open vats and waiting for the yeast to appear on its own. From my little bits of reading around they’re also often used as a second yeast, with wort sometimes having other yeast added to start with and then left with a hope of having the local form of brett infect the brew, and homebrewers usually use them in a secondary fermentation, where fermentation has been started with another yeast before the brew is transferred to a new container without sediment and fermentation continues after pitching some new yeast. So, in short, using brett like a normal beer yeast doesn’t seem to be particularly usual.

My penultimate beer was Bruxellensis, named for the Brussels region that it was once native to. Reading around a bit shows that while this yeast is behind a lot of the typical flavours found in Gueuze and other Lambic beers, it’s also a bit of a pain. It has a high tolerance to alcohol, kills other yeasts that might be around and can impart funky flavours to beer that wasn’t meant to be infected with it. However, that all makes great lambic beer, so I’ll forgive it. The beer made using the Bruxellensis was even fruitier than the American Ale, stacked full of Ribena cordial blackcurrants, sweet orange and cidery apples, ones that have been in a bucket too long and have started becoming cider all on their own. There were hints of Gueuze sourness and a touch of balsamic vinegar – the most over the top and different of the series.

My last beer was the Lambicus, and from its name I assumed that this would be the monster of the lot. However, that wasn’t the case – the beer was probably the most restrained of the whole lot. There was some light fruitiness, a bit of the American Ale tropical fruit as well as the apples and ribena of the Bruxellensis, savoury maltiness in the middle and a light, sweet spice running through. The hop bitterness was back up towards the English Ale end of things and the finish was pleasantly bitter. A weird mix of all of the rest of the beers or a sign of my palate being entirely jaded after five other tasters? I was wondering if it was a sign that using a commercial Lambicus rather than doing a slow secondary fermentation in big open vats led to a reduced impact on the flavour, but from a read around it seems that this is normally described as a high intensity brett. Quite strange, unless I was handed them in the wrong order…

So, as expected the yeast does have a massive impact on the flavour of a beer. I don’t know quite how much of this flavour variation would be passed on to new make spirit if the above beers were distilled, but I’m suspecting it’s a lot. While finding a distilled version of the Mikkeller Yeast Series is currently impossible, the closest we can get is the Four Roses bourbons, with their ten yeast/mashbill combos, and from those alone it seems that there can be a huge differences (although where those differences come from is a matter for debate). One for further study…

One Reply to “The Mikkeller Yeast Series 2.0”