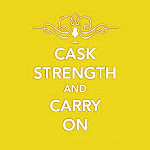 The boys of Caskstrength have been good to me over the years. I went to their first ‘proper’ tasting; grabbed a lift with them over on Jura, allowing me to have a flying visit to Caol Ila and thus be able to say that I’ve been to a distillery on Islay; been mentally scarred by images of them wearing nothing but socks; and now I’ve been to the launch of their third whisky.

that they do around the whisky industry they’ve been keeping an eye out for interesting whiskies and planning their ongoing project – bottling whiskies from A to Z. A was for Arran, B for Benriach and C has now been revealed – Cutty Sark. The Cutty Sark blend was invented back in 1923, in the offices of Berry Brothers and Rudd, with the intention of creating something that was more styled towards being an aperitif. Since then their fortunes have risen and fallen, with the repeal of prohibition in the USA creating a market for them to expand into (not that they were entirely unknown even during those years…), while home sales have declined, leading them to be less known in the UK than abroad.

However, the official birthday of Cutty is marked as March 23rd 1923, making last Saturday the 90th birthday of the whisky. As the brand owners weren’t making a big thing of it at the time Joel and Neil decided to grab hold of the idea. Their whisky is bottled, unusually for Cutty Sark, at quite a high strength – 51.4% abv, 90 proof in old money. There are only 500 bottles of it as well, which while a larger outturn than their previous bottlings is still a tiny release for Cutty, who produce about 5.5 million bottles per year, with Neil commenting that 500 bottles is probably the breakage allowance for a usual shipment. This drop to a smaller batch meant that it was a bit more of a challenge to create, with part casks being used rather than the regular larger batch method of dumping a large number of casks at the same time to create the flavour profile required.

Neil and Joel worked with Cutty Sark master blender Kirsteen Campbell to put the blend together, focusing on first fill bourbon casks and using the blend’s regular touchstone malts of Macallan, Highland Park and Glenrothes, all owned by Cutty owners Edrington, as well as North British grain and a touch of smoky whisky to add a touch of difference to the usually unpeated Cutty Sark style. After blending it was reracked into a sherry butt to marry for a few weeks ready for bottling earlier this month.

Cutty hasn’t had a lot of love in the UK until recent times, other than the occasional window display in Berry Brothers & Rudd, but with Kirsteen’s appointment as master blender they’ve started putting in a bit more of an effort. Along with their high-end Tam O’Shanter bottling (that I loved) and their alternative to regular yellow label, Storm (which I didn’t), they’ve also got a Prohibition Edition coming out to celebrate the 80th anniversary of the repeal of the 18th amendment, an unspecified ‘ground breaking PR event’ in the autumn and £20m of investment over the next five years in an effort to relaunch Cutty in the UK. In the meantime, here’s a video of a yellow seaplane. It’s something to do with ‘flying the brand back home’, but I don’t really care – I just love seaplanes: In expected fashion, the launch of the whisky was a slightly random affair, with Captains (I assume from their hats and matching striped shirts) Ridley and Harrison meeting us Edgware Road tube station with an iPad full of sea shanties, a tea chest of Cutty Sark bags, a map showing that the Circle Line is the shape of a bottle lying on its side and a Travelcard for each of us. A tube journey of legend was had, with the four stops before we got to Farringdon all shown to have relevance in some way to the whisky industry. Along with the tales of continental brewers and their bread and butter based stills, a distiller whose first name was Euston and the indentured bog baby peat cutters of Kings Cross, there were also more sea shanties and a sou’wester. As is The Law on the tube, we were entirely ignored by everyone else in the carriage. Keep calm and carry on, Londoners.

When we reached our destination (home of the Scotch Malt Whisky Society, extant in the area for hundreds of years, we were told) a small fleet of cabs whisked us around the corner to tiny hole in the wall bar Casita, for some cocktails and a taste or three of their whisky:

Nose: Lemon meringue pie with a buttery (biscuit) base, cold vanilla custard, a tickle of sweet sherry fruit, spiced and soured butter, green apple and a touch of nutmeg.

Taste: A kick of boozy heat up front (you can taste the 51.4%), white pepper spice, young spirit, sweet and sour apples, spicy sponge cake with raisins, and a touch of cream.

It’s quite easy to say what this is not: it’s not a huge dram, it’s not smoky, it’s not particularly old and it’s not going to change the world. It is light, creamy, lightly sherried and a bit fighty thanks to its cask strength nature. It is definitely a Cutty style whisky, I can see it working well in warmer times with a spot of cold water or an ice cube, and it stands up well in cocktails, with the extra punch of the strength helping it to avoid getting hidden behind other flavours. All in all a decent first blend from the Caskstrength boys, a continuation of the Cutty Sark style and a suitable entry for C in the A-Z. Now the speculation into dram D begins…