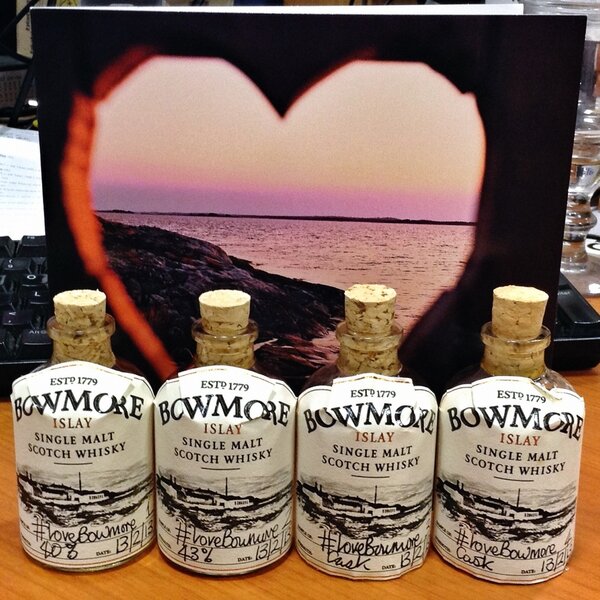 Twitter is becoming increasingly ubiquitous in the whisky world, with the initial onslaught of geeky whisky fans acting as a vanguard to bloggers, writers and producers who have been signing up and joining in the conversation with various levels of enthusiasm. One of the more recent inductees into the online world is Rachel Barrie, aka @TheLadyBlender, master blender for Morrison Bowmore Distillers, the folks behind Bowmore, Glen Garioch and Auchentoshan (as well as the “I’ve never seen them before” McLelland’s single malts).

She’s thrown herself into tweeting in an enthusiastic manner and as a first larger work related thing put together a bunch of twitterers to join in with the first Bowmore Twitter tasting under the hashtag of #LoveBowmore. I was on the guestlist.

Scheduled for the Valentine’s eve it was to be a run through of four mystery whiskies with Rachel talking us through them online. It was a decent crowd, with about 50 people chipping in on the hashtag and some ‘lively’ conversation. A word of advice to Rachel – asking people ‘What are you wearing?’ on the internet very rarely leads anywhere good. Anyways, on to the whisky:

#LoveBowmore 1 – On the nose it was quite soft, with floral notes, some wax and creamy grain – porridge with brown sugar. Behind that there was a light mulchiness, sour apples, candied orange peel, sea shore brine, a squeeze of lemon juice and some muddy peat underneath everything. On the palate it was quite oily, with syrup sweetness up front as well as a few floral notes and lots of creamy grain. It slowly turned sour, with peat smoke, brine and earthiness coming in along with apple skin and a bit of tart flesh towards the end. It finished with some white pepper spiciness, biscuity grain, dry woody spice and gentle peat smoke. Once the gang had done some tasting, innuendo laden tweeting and a bit of guessing, Rachel revealed it to be Bowmore Small Batch Reserve, which I have not only written about before, but also have a bottle of in the cupboard. Suffice to say I quite like it.

#LoveBowmore 2 – On the nose it had leathery sherry notes, burnt sugar, medicinal edges, tar, some coal smoke and charred fruit (the puffed up burnt raisins on the edges of a fruit cake), all backed up by a touch of lighter fruit and some cream. More sweetness developed as it sat in the glass, as well as some dark rubber notes. To taste it had pungent fruit and sour butter up front, with woody tannins coming fast and touches of menthol and black liquorice developing. Behind that was woody spice, cinnamon sugar and blackcurrants, with fruity chew flavours appearing as it sat in the glass and (thanks to my cold flat) warmed up. A touch of water sweetened things up and brought out some lebkuchen spiciness. It finished with dark wood, sour red grapes, tannic hints and a touch of green apple. This was revealed to be Bowmore Darkest 15yo, which shocked me as it seemed much darker and more savoury than the bottle I tried in Canada a few weeks ago. It seems a few others felt the same, so I suspect this is either a common taste bud misconception or a sign of batch variation.

#LoveBowmore 3 – Our first cask strength dram of the night, it was quite closed on the nose initially. It had sweet grain, coal smoke, concentrated fruit and spice, grapefruit skin, butter icing and a meaty hint hiding in the middle, but it all felt a bit ‘compressed’. Tasted neat it started with sour cream and vanilla, lemon zest and bitter orange, and brine and tar, before bursting into sweet coal and green wood. It seemed to finish quickly with a touch of wood and apple skin, but reappeared after a few seconds with vanilla, fruit skin and some floral notes. Water changed things quite considerably, with the nose sweetening up with milk chocolate, sweet and sour apples, pine needles, grapefruit, cinnamon and burning spices. The smoke expanded into a sweeter coal dust laden smoke, with some coal tar, wet wool and brine. On the palate there was lots of sweetness, with creamy fruit (cheap strawberry icecream?) turning darker through liquorice to burning pine needles. The finish was more consistent with floral notes, fruity sweets, dark wood, and a mix of light and heavily toasted grain. I had a guess that this was a bottle that I have on my desk and was right: Bowmore Tempest Batch 4 aka Dorus Mor in the US for trademark reasons – the two editions have the same recipe but using a slightly different selection of casks, if my decoding of the twitter conversation is correct. We’ve been waiting for the new Tempest to arrive at work for a while and it looks like it should be on the market in early April.

#LoveBowmore 4 – Our final dram was announced as being about 57% and was slightly darker than the Darkest in position 2. On the nose it was packed with hugely rich and creamy sherried whisky flavours – dark fruitcake batter, heavily spiced and mainly consisting of fruit. That was backed up with hot and pungent leather, black tea, dried coffee cherries and demerara sugar. To taste it was initially cloyingly sherried, with lots of dried fruit and sweet butter. Then in came the leather from the nose, alcohol heat, dark wood, liquorice, marzipan, lots of raisins, black treacle toffee, fruity dark chocolate and some menthol as it, as my notes from the tasting read, ‘digs into the tongue’. Behind all of that was all pervading hammy smoke and a touch of coal. It finished with bitter dark wood and more treacle, which lightened a bit to give syrup, raisins and some crunchy green apple before liquorice reappeared and swamped everything else. Water brought out a medicinal note on the nose and reminded me where I’d had something like this before – heavily sherried Laphroaig from the SMWS. In rolled kippers, empty fish tins, even more raisins and a touch of dry amontillado nuttiness. The heat on the palate was calmed, with more pine, crushed vegetation and woody smoke, although it remained quite savoury. The finish lightened up with even more sweet fruit, crunchy apple and a touch more spice – tingly cinnamon joining the liquorice as it faded. Despite badgering from the assembled tasters Rachel remained silent on the details of this dram:

In no.1 Vaults, I tease #loveBowmore 4 from the cask. Pleased to meet you, hope you guess my name. http://t.co/lGuFEVVc

There’s a transcript of all the chatter on the #LoveBowmore hashtag over here.

Bowmore Small Batch Reserve
Islay Single Malt Scotch Whisky, 40%. ~£35 from supermarkets (although often reduced down to as little as £25)