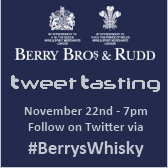 In regular Tweet Tasting style we each received our samples (other than the usual few victims of international postal services), poured drams and then tasted while chatting along on Twitter. Things have got a bit busier since my last Twitter tasting and it was reported that during the evening the #BerrysWhisky hashtag started trending on Twitter in the UK higher than the usual chatter about Justin Bieber. While I’ve never seen a serious tweet about The Bieber I suspect this is due to a disjoint between the set of people who obsessively tweet about him online and the set of people who I follow. If there is any crossover between those groups I’m not aware of it, although that could well be due to people having separate Belieber accounts to try and maintain a face of professionalism. The fact that I know the term ‘Belieber’ means nothing. Move along now.

We kicked off with a 1992 vintage Littlemill, bottled in 2o12 (as all of these whiskies were) from cask #9. On the nose there were wet flannels, gravel, ferns, hints of soot and damp grass, with a toffee sweetness hiding underneath. It developed as it sat in the glass, revealing white chocolate, cornflakes, ginger, brown bananas, sweet and savoury Worcester sauce, and a slightly synthetic apple Jolly Rancher note. On the palate it was oily but zesty and fresh, starting with a big briny note, followed by sharp apple skin, squirty cream and spiced apple. Water brought out more spicy ginger in the nose, both crystallised and the spicy note you get from new wood, but knocked back the sweetness on the palate, leaving sour apples and smoky, bitter wood. It finished with apples, both flesh and skin, woody spice and some damp wood.

Next up was one of Berry’s comparitively rare grain releases. They’ve been putting out one or two in each of their more recent batches of whisky and as yet they’ve all been rather good. This encouraged me as I’ve not tried a whisky from this distillery before – North of Scotland, a short-lived distillery which only ran between 1958 and 1980. This was a 1973 vintage bottled from cask #14570. On the nose it was classic grain – glue, sappy wood, maple syrup, apples with their skin, toffee bars and grilled banana, with white melon, sponge cake, cinnamon and some floral hints. To taste it was soft and packed with brown sugar, balancing out some sour and bitter wood hiding behind. It also had cinnamon, coriander seed and clove, hints of coffee and light cereal – a bit Crunchy Nut Cornflakey. Water accentuated the wood but also lightened up some of the other flavours, showing of the sweet bananas and gluey notes. It finished with dark caramel, damp wood and a touch of liquorice root.

We then moved onto the oldest whisky of the night, a Jura 1976, also the most expensive whisky that Berry’s have ever bottled – a colossal £200 a bottle! Sarchasm – Berry’s still surprise me with how well they keep their prices down: last year’s distillery bottling of Jura 1976 goes for about £470. This was bottled from cask BBR888, a number that will ensure that the far east market will jump on it even if noone else does. The nose was quite close to start, with perfumed wood and crunchy apples, but over time it developed through sponge cake, almonds and floral hints to big hammy smoke and warm leather. To taste it had much more, with soapy sandalwood, rich leather, moist and pungent tobacco, sour orange peel, brown sugar, dried fruit and hints of wood smoke. Water didn’t open up the nose, as I’d hoped, but did bring out a bit more sweetness – dark chocolate and brown. The dilute body became more floral, with some soapy notes that were quite different to the traditional ‘floral soap’ that you get from Bowmore. It finished with some lingering soapiness, the type of woodiness that I like to refer to as ‘Good Old Wood’ (with caps) and a green, herby edge.

Last on the list was the only peaty dram of the night, stepping away from their usual style – a Bunnahabhain 1989, bottled from cask #5755. On the nose it kicked off with grapefruit (one of my favourite whisky flavours) and fruity Haribo (quite specifically including the fried egg sweet – yellow fruit jelly and fluffy meringue/marshmallow like white), pear drops (with real pears rather than pure artificial flavouring) and chewy Refreshers. Hints of smoke developed in the glass along with floral notes, sherbet lemons and some parma violets. To taste it was sweet with more floral notes and soft smoke – I was wondering whether this was a Bowmore that they’d accidentally snuck into my Bunna bottle. There was also cocoa, lemons, royal icing, salt, spicy wood, rich wood smoke and a solid meatiness. Water added some creaminess and softened out some of the wood, while leaving the spicy notes – chilli and white pepper. It finished with more Haribo, apples, tropical fruit squash and a hint of smoke, especially on the inhale.

I managed to put together a transcript of all the properly tagged up tweets (which is far from all of them – people get frisky with their tweeting as the tweet tastings progress) which you can find here if you want to see the full details of what everyone said (including the randoms who were wondering why #berryswhisky was trending). Miss Whisky (Warning: contains a picture of Justin Bieber. Canadians…), Whisky Discovery,  Living Room Whisky and, of course, Tweet Tasting king Steve have also all posted accounts of the evening. While I was writing this there was a Dalmore tweet tasting going on, there was a Cutty Sark one last week and Steve hinted that there are more in the pipeline – follow the Whisky Wire carefully on Twitter and you should be able to join in if you apply in time.

One Reply to “#BerrysWhisky – Berry Brothers and Rudd Tweet Tasting”