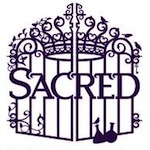 After a summer hiatus the Juniper Society have returned. This is the sort of thing that happens when the organisers leave the hosting bar to go and run other places, but they’re all still friends and the lovely folks at Graphic are still hosting these evenings of gin fuelled learning, with Sarah and Adam still throwing booze around. You can see what’s happening over on the Facebook page. Anyways, this was the first one I’ve been able to make it along to for ages but the plan was still the same as usual – gin maker comes in; gin maker tells everyone about gin; everyone drinks gin; profit. This session was with north London’s cold distillation pioneers – Sacred Gin. Rubbish picture due to it being very dark. And my not being very good at white balancing in iPhoto.

Sacred have been around since 2009, are based in Highgate, and are named for Boswellia Sacra, a tree from which frankincense, one of their botanicals, is obtained. Founder Ian Hart, who led the Juniper Society tasting, left the world of finance, fell back on his science degree and started making gin, a career path that I thoroughly approve of. Initially they were known for the very different way they made their gins – all using vacuum distillation – but these days they also have a conventional still, although they still distill all the components of their various products separately before blending for bottling. Their vacuum stills operate at about 1/20th of an atmosphere, allowing the liquid in the still to boil at about 25ºC, whereas the ‘hot’ regular atmospheric pressure stills boil at about 80-90ºC, above pure ethanol’s natural boiling point of 78.4ºC thanks to the water and other ‘impurities’ (aka flavour) in the solution. The low temperature distilling allows a flavour extraction process that doesn’t ‘cook’ the botanicals, while the higher allows the heat to influence the flavour compounds – both produce very different flavoured distillates and they mix and match to get the flavour profile they are after. In order to show off the way that heat can affect the flavour we were presented with a fairly bewildering array of different distillates, including some hot and cold distilled juniper and cardamom to allow us to compare the different methods.

We kicked off with a pair of released products, the flagship Sacred Gin and the newly released London Dry vodka. The former is a mix of various distillates including juniper, whereas the latter missed out the juniper and thus is by law a flavoured vodka, although other than the missing juniper it was produced to the regulations of a London Dry gin.

The Sacred Gin was light on the nose, with some sweetness and a hint of soap. To taste it was delicate and pleasantly oily, something I haven’t expected from vacuum distilled spirits, as I’d thought that oily compounds wouldn’t be ‘light enough’ to go over into the distillate. Turns out I was wrong. As usual. There was also menthol, sweet liquorice and some woodiness. It finished with lingering spice and coriander. The London Dry Vodka had a very clean nose with a hint of sweet grain. To taste there was sweet spice, icing and a hit of citrus. It finished with sour lemon juice and some puckering lemon zest.

One thing that Sacred have been known for is their ‘blend your own gin’ kits, comprising of a number of bottles of single botanical distillates for you to mix and match to create a gin to your own specification. However, they’ve recently upgraded each of the individual distillates to be gins in their own right, at least by the letter of the law as interpreted by Ian. He claimed that legally gin needs to be flavoured by ‘juniper and other botanicals’ and as such they now add a small proportion of juniper, orris and angelica distillates (about 5%) to each of the single botanical distillates to ensure that they are all gins. I’ve had a bit of a read of the gin regulations I can find online, and the overriding rule seems to be the phrase ‘the juniper taste is predominant’ (this document, Annex II, sections 19-22. IANAL, etc) so I’m not entirely certain if he’s going down the right track, however the spirits themselves are interesting. There were six of them, so here are some compressed tasting notes:

Liquorice – hot distilled (if I remember correctly – I lost my notes of how they were distilled)
Nose: Very light – not a lot but spirit. Quite vodka-like.
Taste: Woody – like chewing on chopped up liquorice root. Which is what they use to make the distillate.
Finish: Short and clean.

We then moved on to the comparison distillates – hot and cold distilled varieties of spirit flavoured with the same botanical. We started with hot distilled juniper. On the nose it had medicinal sweets and the chemist bought lollipops of my youth (that I had entirely forgotten until trying this), spice and floral notes. To taste it was dry, earth and spicy, with pepper and a hint of the dentist’s chair. It finished with some earthy spice – crushed juniper. The cold distilled juniper was surprisingly different, with a nose of Airfix glue and damp carpets, sweet spice and developing lemon; a taste of dry spice, sweet butter and black pepper; and a finish of lingering spiciness.

Next was hot distilled cardamom, with a nose of lemon and bitter ground cardamon, pods and seeds. On the palate it kicked off with strong menthol notes, backed up by citrus and earthy spice. It finished with soap and lemon Lockets. I thought it was quite pungent and wasn’t quite ready for the cold distilled cardamom, which kicked it into a hat – on the nose it was pure Vicks Vaporub, with a hint of spicy cardamon if you sniffed carefully and didn’t burn off your nose hairs. To taste it was like the inside of an extra strong green Locket – numbing menthol with a hint of cold mint – and it finished with even more menthol. A close second to the eucalyptus vodka I tried a little while back as the perfect alcoholic cold cure.

A bit of a mixed bag for me, but the most impressive thing was the intensity of flavour found in the cold distilled spirits. I’ve always thought of vac-distillation producing thin and delicately flavoured drinks but this has shown me that a lot more flavour and oiliness is carried over in the process than I assumed, and that I need to do more tasting. I hear that the Worship Whistling Shop have just got the first batch of their own rotovap distilled cream gin in…

I still reckon it should be cardamoN instead of cardamoM. But then again I’d still spell dilemma as dilemna if I didn’t know that I’m one of the special people who was taught to spell it wrongly.

Sacred Gin (and most of their other full sized bottles)
Distilled Gin (or whatever else), 40%. ~£30 a bottle.