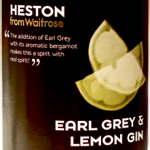 Before I write any of this blog post I feel I need to make a full disclosure: I sort of worship Heston Blumenthal, aka St Heston of Bray. Over the years that he’s been becoming increasingly ubiquitous as the face of SCIENCE! in cooking I’ve watched his TV programs, read his books and even eaten at the Fat Duck. I didn’t stoop to buying one of his infamous Christmas puddings (not for want of trying) and have yet to pick-up any of his specialist salt mixes (a sign that my levels of pretentiousness are dropping) but am still bouncing like an excited child that he has a new TV series starting tonight. When I saw that he had a gin coming out as part of his Heston from Waitrose range there wasn’t much chance that I wasn’t going to buy a bottle. It’s produced in conjunction with the folks at Chase, using their potato spirit as a base rather than the apple spirit they’ve used for their own initial forays into the world of gin. I say ‘initial’ as they have recently released a new potato spirit gin, which is still new enough that it’s not on their website. The Heston Gin is even in the same bottle as their new gin.

However, this is quite a different beast to Chase’s other products, with a recipe created in conjunction with St Heston himself. From the press release I found on the Waitrose website it seems to be a London Dry gin that is then further infused with Earl Grey tea, which would stop it being a London Dry any more (legally a London Dry can have nothing added after distillation). It even only goes as far as saying that it’s a ‘British Dry Gin’ on the bottle. However, the folks behind the Waitrose Twitter account kindly did some research for me and found out that it is actually a London Dry, with the Early Grey steeped before redistillation.

@cowfish Hi. The earl grey is macerated in the gin before distillation. Hope this is ok

Tea as a botanical in gin isn’t particularly new, with Beefeater 24 running with the idea in recent memory, and Earl Grey infused gin is an occasional cocktail ingredient so this fits in with a few trends in the scarily active gin scene.

On the nose it is bursting with lemon – zest, sweetened juice, drizzle cake and icing. To taste it is quite different, with the lemon hiding underneath heavy Earl Grey tea notes – perfumed, spicy and lightly tannic. There is some spicy ground juniper behind the tea along with the lemon, but it is very strongly tea-influenced. It finishes with bergamot (well, the bit of Earl Grey that I’ve always assumed is bergamot – the perfumed citrus note), sweet spice and a lightly lemony tang.

I also tried it in a gin and tonic – 3 to 1 T to G and garnished with some lemon, as suggested on the bottle rather than my traditional lime. Without the lemon it was a bit disjointed but a quick squeeze and dunking of a lemon slice brought it all together – strong tea notes push through the tonic to make this a distinctively flavoured G&T, with sweet lemon and a big dry spiciness.

I’m not entirely sure how ‘ginny’ this is, although as there’s a load of spicy ground juniper hiding at the back of the palate I think it still manages to scrape in as a gin for me. Definitely different, but almost certainly not for everyone.

One Reply to “Heston from Waitrose: Earl Grey & Lemon Gin”