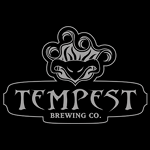 While up in Scotland for the Edinburgh Fringe this year I decided to do a little bit more considered drinking than usual. As well as finding the couple of drams I wrote about in a Quick Tastings post, I spent the week looking for more interesting things to stick down my gullet than the usual pints of random cider and lager grabbed from bars in between gigs. Along with colonising the less busy end of the BrewDog bar on a couple of evenings I went up to see Chris Hoban from the Edinburgh Whisky Blog at Drinkmonger, the shop he wanders around in while wearing an apron to pay for his whisky habit. While in there he recommended again, having told me I had to try it at the BrewDog bar, some beer from the Tempest Brewing Co, who I hadn’t heard of before – so I grabbed a couple of bottles to take home…

Tempest have been around since 2010 and are to be found in Kelso, near the English border to the southeast of Edinburgh. They originally came into being to provide beer for the owner’s pub, but have expanded since to supply bottles, kegs and casks a bit further afield, although they remain quite small. Along with a blond ale and the obligatory new world hopped (I)PAs they’ve got an interesting beer selection, with dark beers and an obvious love of rye. Of the two beers I grabbed one is on their website as a ‘Special Project’ but the other seems to be a mysterious one-off batch… First up is the mystery beer – World of Pain. It’s a rye heavy ale and from the story Chris told me is named as such due to the complete git it was to brew. Rye isn’t the easiest of grains to brew with and makes for a thicker mash, which in turn may get ‘stuck’ and stop the wort running off (misused brewing terms all my own fault). Then comes lots of swearing and various pokings, scrapings and stirrings at a homebrew level which probably scale up to pain and suffering on a commercial sized brewery, even a small one.

Anyways, on the nose it was slightly soapy with mulchy grain, a damp tea-towel mustiness, bitter orange, sweet herbs, red fruit and a hint of bitter black rubber as it warmed up. To taste it was sour and spicy with lots of freshly milled grain, sweet white grape, dark bread, blackcurrants (maybe jam) and some more of the bitter black rubber. It sweetens up as it warms and finishes with lingering fruitiness and a sour hoppy tang, with an almost menthol-like tingle at the end.

I rather liked it, with a good chunk of complexity from the grains and not too much in the way of scariness from the hops, unlike many of the beers that I’ve been drinking over the summer. Next was Unforgiven Ale, which I also tried on tap at BrewDog Edinburgh. It’s a rye and juniper ale smoked with oak – they do seem to love their rye at Tempest. I’m an occasional fan of smoked beers and on cask I quite liked it, although I was slightly in my cups at the time. In bottle I wasn’t so much of a fan:

On the nose it had sour grain, smoky ham (the vacuum packed stuff I get from my local Polish shop that I can’t stop eating despite it being bad for me), tangerines and a hint of rubberiness (a bit like the new wood notes I get on the nose of Spirit of Broadside, some young Bourbons and the Monkey Shoulder experiment I tried earlier this year). On the palate it’s initially sweet, but quickly becomes very smoky, with meaty smoke and bitter wood. With it there is a bit of fruit – sweeter pineapple when cold, more sour redcurrant when warm – and a bit of the rubber from the nose. It finishes bitter and smoky, with charcoal and damp wood, as well as a hint of sweetcorn sweetness.

It’s quite thin and and the smoke and sour combo doesn’t really do it for me. I also didn’t get any noticeable flavour from the juniper, as the smoke overwhelms everything other than the sour grainy notes that I assume are from the rye.

Anyways, one hit and one miss – a pretty good rate and a brewery whose wares I’ll be looking out for next time I’m north of the border. Although I’ll see if I can find something that isn’t quite as rye heavy…