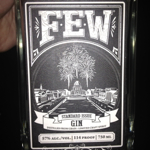 In my constant quest to learn All Things About All Things David from Summer Fruit Cup is my gin saviour. Along with pinging me details of some of the more random gins we have at work he has also run occasional tastings at Graphic and invited me along. The American Gin tasting back on World Gin Day was a bit of an eye opener and I jumped at the chance of attending his most recent one – a walk through a range of navy strength gins.

The tasting procedure was the same as last time – all blind, with David revealing all of the gins at the end after we’d submitted our top three of the night. In addition we’d be asked whether we thought each was from the USA or UK, an attempt to see if there are specific general stylistic differences between the two countries.

I’d done a little bit of research (aka staring at Twitter) during the day and had heard a couple of things that interested me: Master of Malt would have their new Navy Strength gin in the line-up, as would the folks from FEW near Chicago, and Paul Hletko from FEW would be coming along to join in the tasting – I’m always interested to see what craziness comes out of MoM towers and I’d been wanting to try more FEW stuff since I’d tried their aged gin back on Gin Day, so things were looking good.

Here are the gins that we tasted: #1 – FEW Standard Issue Gin – 57% – ~£40
First up was the FEW and sat next to Paul I was hoping that he’d give us a hint if he recognised his gin. I assumed it was FEW from first taste as the underlying taste of their spirit was noticeable, as rather than using neutral spirit they (to the best of my knowledge) use the grain spirit that goes on to become their whiskey. As an occasional fan of young spirits that flavour was one I was looking for and found in spades in this gin. However, a week of pouring FEW G&Ts had thrown off both Paul and importer Michael’s palates and they didn’t pick up on this being their gin. However, Paul did seem to know a lot about the flavour profile, with him picking up the liquorice notes as being specifically fennel rather than liquorice itself – the recipe they use for the Standard Issue is a fennel heavy mix, as well as being different to the one they use for their other gins. This ended up being my second favourite of the night.

Nose: Sweet liquorice and liquorice root, sour citrus, ground black pepper, lots of sweet grain notes.
Taste: Very sweet and spicy with lemon butter, coriander and a hint of rubber.
Finish: Liquorice, anis and sweet butter
Comment: A bit strong, with some of the flavours masked until some water is added. I also tried it in a gin and tonic and the grain flavours pushed their way through even then. A great gin if you like tasting the underlying spirit.

#2 – Plymouth Navy Strength – 57% – ~£30
The navy strength version of my house gin and my favourite of the night. It does very much what it says on the tin – it’s straight down the line gin with a good dose of liquorice sweetness, which is one of my favourite flavours. In recent times I’ve taken to dosing my G&Ts with Adam Elmegirab’s Dandelion & Burdock bitters for the extra tang of liquorice it adds, so I dread to think what’ll happen if I switch back to a less liquoricey gin…

#3 – Perry’s Tot – 57% – ~$30 in the USA
Made by the New York Distilling company in Brooklyn this is the companion to their Dorothy Parker gin, bottled at 40%, and is named for Matthew Calbraith Perry, commandant of the Brooklyn Naval Yard in the early 1840s. This ended up being my 3rd favourite of the night, with the its spicy nature giving something a little bit different without going quite as mad as some of the gins that followed…

#4 – Professor Cornelius Ampleforth’s Navy Strength Bathtub Gin – 57% – ~£40
I’ve spoken with the professor, aka Ben Ellefsen from Master of Malt, about his gin experiments in the past and this continues on from the previous releases. It’s a macerated rather than distilled gin, sitting between the cheaper cold compounding method (often using extracts rather than whole ingredients) and more expensive distilled gins (redistilling after maceration), and basically involves putting botanicals into a vessel of neutral spirit for a time before filtering and bottling. Rather than using whole botanicals and leaving the mix for a day, as they do for the regular bathtub gin, for the navy strength they crush the botanicals and only steep for an hour in 57% spirit, which makes quite a different beast. It was also the only yellow gin we tried, which should have given the game away.

Nose: ‘Christmas’ – nutmeg, clove, cumin, cardamon, garam masala all wrapped up with butter heavy, uncooked cake mix.
Taste: Thick and spicey, although powdered spice rather than fresh spices – almost gritty. It also has some brown sugar sweetness balanced by bitter woodiness
Finish: Uncooked bitter spices and biter wood.
Comment: Before I knew what this was I thought it might be the latest edition of a homemade macerated bathtub gin that I tried on World Gin Day – that was quite coriander heavy but otherwise exhibited a similar texture. This is also similar in flavour to MoM’s single origin gins, each made with a different type of juniper, which also used crushed botanicals (well, crushed juniper – they were single botanical ‘gins’). If I’d stuck with that as a guess I’d probably have realised it was the MoM one, being the only commercial one along the same lines, but I didn’t and assumed it was a crazy American gin. It was way too over the top for my palate, with the uncooked spice flavours not working for me – others at the table loved it but my problem was summed up by the question I asked Ben on Twitter after the tasting: ‘What can you do with it?’.

#5 – Hayman’s Royal Dock – 57% – ~£30
The Hayman family are the ancestors of James Burrough, the chap behind the original recipe and creation of Beefeater gin, and they have started producing gins under their own name in recent years. I mentioned their Old Tom a while back and haven’t had a chance to try their regular gin, but have recently noticed that they’d added the Royal Dock as a new entry in their line. It’s based on the “Burrough’s Senior Service Gin” that the family used to make back in the 1860s and it’s named for the Royal Victoria Dock victualling yard in Deptford, the largest of the Navy’s supply depots before it closed in the 1960s.

Nose: Very light, with sweet citrus, spice and vegetal notes.
Taste: Sweet liquorice, mint, piney juniper, lemon Lockets, black pepper and floral hints.
Finish: Sweet lemon and zest.
Comment: This one suffered from coming after a pair of more powerful gins, especially the MoM beast, but was a straight down the line ‘ginny’ gin that ended up being the group’s favourite of the night.

#6 – Leopold’s – 57% – ~£35
Made in Denver, Colorado, using a different process to the other gins on the mat – each botanical is distilled separately and then blended after the fact. This gives more flexibility over the final product and, as pointed out by the website, allows the distiller to treat each botanical differently so as to be able to get the specific flavour wanted from it without having to give consideration to how the other botanicals will behave. However…

Nose: Earthy roots to start with quickly opening up with a big burst of heavily floral Earl Gray tea, with white pepper.
Taste: Overpowering pot pourri – Earl Gray turned up to 11 and then some – air freshener, twigs and black pepper. Although with some time in the glass some fruity flavours appear.
Finish: More Earl Gray (the kind that you want to scrape your tongue to get rid of) and peppery spice.
Comment: This reminded me a bit of some of the big flowery Bowmore whiskies, the ones that I don’t generally like, especially as adding water brought out some violet notes. Definitely not for me – way too over the top and flowery.

Guessing between UK and US made gins I ended up with four out of 6, billing Perry’s Tot as British and the MoM gin as American, but did manage to guess that the first gin was FEW, so it seems my gin-related taste buds are potentially getting better. Or that I was lucky, which I suspect was the case…