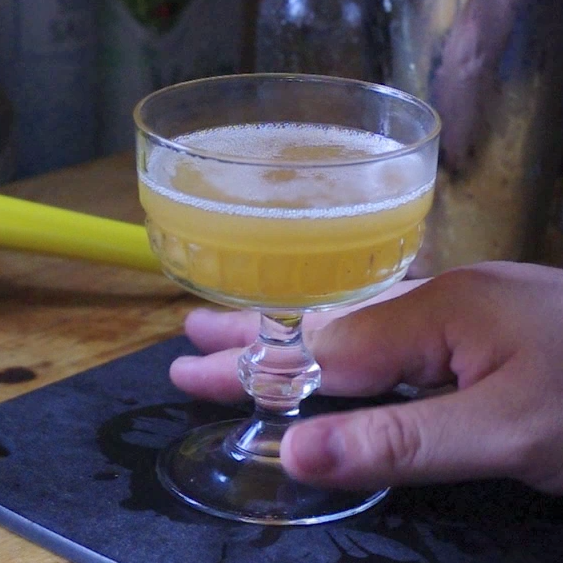 The Daiquiri has always been a cocktail I’ve avoided. In my minds eye it came served in a hurricane glass, stacked with crushed ice, fruit juice and more garnish than a large fruit cocktail should aspire to. At the back of mind there was a niggling sensation that I was getting it wrong. Hemingway drank these, and he’d have jammed a fruity umbrella clad drink sidewise up the arse of the bartender who offered it to him, while shooting a nearby wild animal with a rifle and necking a bottle of champagne. I confess that I also know little of Hemingway, but my imaginary version of him is probably more impressive than the real man.

One trip to Wikipedia later…

My recently reinvigorated interest in the daiquiri as something I might want to pour into my face was due to this video/post by Jeffrey Morgenthaler. He, as he often seems to be, was pissed off with the world of bartender trainers teaching people to make crap drinks and gave out the recipe for a ‘Difford Daiquiri’, with proportions of ingredients selected by Simon Difford of CLASS Magazine. I was rather surprised – the Daiquiri is much simpler drink than my broken memory suggested…

Making a bulleted list for that seems like overkill. It really is the regular cocktail base recipe for rum – spirit, sour, sweet. As ever thought, it comes down to the selection of the ingredients, their proportions and preparation. While old-skool Daiquiris were stirred in a glass packed with ice, more modern recipes call for it to be shaken and strained – I rather like the short kick in the face drink so I went down that route, as did the Difford recipe. He recommends 2.5oz rum, 0.75oz lime, 0.5oz 2:1 simple syrup, aka 10:3:2 in whole numbers. Morgenthaler also went for a darker rum rather than a white one, something that I approve of, liking the richer flavour you normally get from them.

I was rather taken by the idea, bought a bottle of rum on my way out of the office (one of the benefits of working above a large booze warehouse), grabbed a bag of limes from Asda and went home to experiment. Being a man with a shiny new camera that shoots video I thought I’d have a go and made this (on Black Tot Day):

That would have been it for my Daiquiri blogging if I hadn’t mentioned it on Twitter. Within moments I had another couple of ratio opinions, and every time I’ve spoken about daiquiris over the last few weeks I’ve received more. A perfect excuse for more experimentation.

Different rums will, of course, affect the proportions, so (after a foray into using Mount Gay Eclipse, the golden rum that I used to swear by) I’ve stuck with the Doorly’s XO – it’s rich, sugary and still has a nice chunk of rummy flavour to it along with the wood. The sugar and lime ratio stayed pretty much the same at around 3:2/2:1, but the amount of rum went up and down quite a bit. In the end I went with a very rum heavy mix of 10:2:1 – 2.5 shots rum, 0.5 lime, 0.25 of syrup (tweaked after shaking if need be to make sure it’s sweet enough, but the Doorly’s normally sweetens things up nicely). Nice old style cocktail punch, with a nice bit of sweetness from the rum and syrup and balancing by the citrus.

I didn’t stop there, though, as I had lots of limes, half a bottle of rum and a next day with nothing on. Taking inspiration from my love of the whiskey sour (almost the same drink in concept) I went for a more even ratio – 1:1:0.5 (I normally use 1:1 syrup in my sour mix, so this is pretty much my usual even recipe). A totally different drink, with a very different base flavour to the vanilla heavy kick of most bourbons, with fruitiness and some rich sweetness.

And then I ran out of limes. And rum. Experimentation has not yet finished, but mainly I realise that I was rather wrong about the Daiquiri and I need to read more cocktail books. But not until I finish reading The Old Man and the Sea

2 Replies to “The Daiquiri”