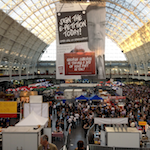 The festival was back in Olympia after many years away, due to the Olympic games taking over Earl’s Court. The return of the high glass roof was welcomed, as with a week of sunshine it lifted the festival, which has got bogged down and dreary by the end of the afternoon at Earl’s Court due to it insulation from natural light. I got out before the evening so I don’t know how full it got later on, but if it can handle the numbers of a big year then I hope the organisers move back. Unfortunately I suspect that attendance was down this year due to the Olympics and we’ll be back in Earl’s Court next year so that they can fit everyone in. Anyway, some beers:

Dark Star American Pale Ale – The bronze medal winner in the Champion Beer of Britain competition, and a bit of a shock decision. While the last few years have had showcased perfectly good and tasty beers, there has been much in the way of major innovation in any of the winners. However, this year the gold went to a barley wine (that the makers even acknowledged was a niche within a niche) and the bronze to a massively hopped, over 5% ABV, American influenced IPA of the kind that we are increasingly seeing pop up from new school breweries. It may be the sign of a change in the way the judges are approaching the awards or it could be an indication that the people voting on the beer are changing, but as long as interesting beer gets awards I don’t really care.

Anyways, I know this one well and kicked off my day with a half as I was standing near the Award Winners bar. It’s a big and tasty hop bomb, with lots of green flavours and good sweetness to balance out the bitterness. One to grab if you get a chance. Worthington White Shield – A beer of reputation and a long brewing history that I’d heard had in more recent times become a great session bitter with a good hoppy bite. It wasn’t and didn’t – uninteresting brown beer that was thoroughly uninspiring.

Otley O-Garden – Hugely fruity, with tangerines, orange Chewitts and Fruit Salad chews. It had a bit of weird artificial ‘fake fruit’ taste towards the end which was rolled over by a big hoppy finish. Very nice, but I suspect it’d get cloying after a pint or two.

Brodies Dalston Black IPA – At this point I gave up on my attempt to try things that are different to the styles of beer I’ve been drinking recently and stuck with big IPAs. This is one of my favourite black IPAs I’eve tried in recent times, despite being hugely over the top – loads of hops all balanced by a big whack of dark caramel and malt.

Oskar Blues Deviant Dale’s IPA – Bought during the foray to the American bar, where only one person got their first choice due to the ongoing problem of popularity and rationing of casks to try and get the beer to last until the final day. This was a step up in insanity from the Brodies, with pine resin, spicy mango, bananas, earthy malt, orange peel and a hint of herb heavy, tomato-basaed pasta sauce.

Hop Daemon Green Daemon – Despite the company name this was nowhere near as hoppy as I was expecting, with a rich maltiness shining through the green and bitter flavours, but at the same time not overpowering it, leaving the beer crisp and refreshing.

Welbeck Abbey Cavendish – My last beer and a thoroughly pleasant one. Sweet and malty with some crisply balancing citrus notes, a touch of biscuitiness and a good medium hop finish.