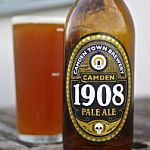 The lengths to which companies having been avoiding mentioning the Olympics is quite impressive. From AN UNNAMED ONLINE SPIRITS RETAILER running an ‘Award winners’ special offer (with a ‘Spirits Sprint’ of questions to answer to get money off) to BrewDog’s very carefully worded campaign for Never Mind The Anabolics, blatant Sports Day related products have popped up and done their best, in either mind or body, to avoid mentioning the forbidden word combinations that will provoke the brand police to descend waving their metaphorical truncheons. One that is seemingly carelessly uninfringing is the latest brew from the folks at the Camden Brewery – 1908 Pale Ale.

Many things happened in 1908: it was a leap year; Butch Cassidy and the Sundance Kid died in a shootout, allegedly; the Boy Scout movement began; the fourth Summer Olympiad was held in London; the Tunguska ‘event’ occurred (it was aliens. I saw it on the internet); and Doctor Who actor William Hartnell was born. One of those events may seem to have relevance to this summer…

In honour of the 1908 Games the folks at Camden have dug out a recipe from that year, brewed at the original Camden Brewery that was based a few minutes walk from their current location under the supporting arches of Kentish Town West Overground station – you can find some more info on the old brewery on the new brewery blog. Anyways, carefully avoiding mentions of London 2012 the back of the bottle talks about Edward VII watching the games and the lifting of Londoners’ hats to the impressive athletes. Good work Camden chaps, no laws broken.

I picked up a bottle at the weekend while doing a pub crawl around Camden, taking in the establishments that were part of what BrewDog were calling the Unreal Ale Festival – BrewDog Camden, The (Our?) Black Heart, The Southampton Arms and The Camden Brewery (who are also a bar on occasion). I also stopped in at Tapping The Admiral, because they were on the way home and they’re lovely. I tried 7 beers – 5 of them were from London: Camden Ink, Camden Wheat, Howling Hops IPA Brew No.1, London Fields Love Not War, Kernel IPA Columbus/Centennial and Truman Swallow and Swift. Good work London (and Essex in the case of Truman – I’ll allow it, this time…).

Unfortunately the gas was playing up when we got to the Camden Brewery so we ended up with (tasty) bottles, and I grabbed a 1908 for later sampling at home. The beer is an unfiltered and cloudy pale ale, with a reddy orange tint. Camden like leaving their beers unfiltered and it pleases me – their unfiltered lagers are tasty things (as are the filtered ones) with a nice weightiness in the mouth you don’t often get with yellow fizzy beer. On the nose it was almost Hoegaarden-like, with coriander, orange peel and sweet wheat. To taste it started with sweet orange before quickly picking up some green hop bitterness and a touch of buttered bread, dry malt and sour orange peel. It finished with a burst of coriander spice before sitting on green leaf bitterness and balancing sweet grain.

It’s sort of how I imagine ‘old fashioned beer’ to be – quite thick and hazy, grainy and pleasantly bitter. I have no idea if this is how beer tasted back in 1908, but I don’t think they had it that bad on the drink front if it does.