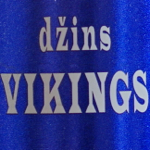 So, it’s World Gin Day. While I don’t need an excuse to write about gin it is always nice to have one and I’ve spent the last few weeks going through our (scarily large) pile of gins at work making a list of some of the more interesting ones. While putting together a TWE blog post to do some pimping of my list and WGD I realised that I have been much remiss in my gin buying activity and had not got round to picking up something I’d promised myself, and others, that I would – Viking Džins. This turned up at work almost a year ago and immediately caused some confusion. ‘Džins’ was not a word known to me and it wasn’t until I turned to m’colleague and said it out loud that I realised what it was. I then did some mild internet scouring only to find nothing about it. I found a handy Lithuanian who spoke a bit of Latvian (having managed to work out what ‘Latvija’ meant) and translated the back of the bottle:

An excellent and strong gin, which ensures widespread use through its usefulness in the preparation of cocktails. Pronounced juniper berry flavour and aroma.

In the end that was all that I could find out about the gin itself, however the distillery who makes it have a bit more of a backstory.

Latvijas Balzams are a Riga based distiller, privatised in 1997 and formerly the state distilling company of Latvia. They produce a stack of different spirits, liqueurs, wines, ciders and non-alcoholic drinks (including a scarily large range of Ready To Drink mixer/spirit combos) but are best known for Rīgas Melnais Balzams – aka Black Balsam. I’ve never tried it, but it came up while chatting at the most recent Whisky Squad and was described as tasting awful, as well as potentially leading to the breakup of a relationship. From what I can tell it’s a classic bitter-sweet central European herbal concoction, mixing together a whole host of herbs, spices, berries and barks before steeping them in vodka and aging the spirit in oak barrels. We have bottles of it at work and it does sound like the sort of slightly scary thing I need in my drinks cabinet next to the Unicum…

Anyways, back to the Džins. First I tried it neat:

I compared it to some Plymouth gin, my regular tipple, and found it to be much heavier and earthier, without Plymouth’s lighter citrus zing. The Juniper was much muddier – definitely there, but not as spicy as the Plymouth.

Next I tried it in a Gin & Tonic, using a 1-3 ratio of G to T. It was fairly bad. At first quite nice, with the heavy sweetness of the gin balancing nicely with the bitterness of the tonic, but from there it went rather wrong – ‘wet washing washed with lemony scented washing powder left too long in the basket before being hung up to dry’. A squeeze of lime might have taken the edge off, but I only had lemons to hand.

I then, after some inspiration from Adam Elmegirab on Twitter, went for a pseudo-Crusta – a classic cocktail that usually consists of spirit, orange curaçao, gomme syrup and bitters. Annoyingly I don’t have any curaçao (something that will be fixed durinfg my next shopping spree – I need me some Ferrand Curaçao, it’s excellent) so instead I used maraschino as a sweetener and used a mix of orange and angostura bitters. So, adapting Adam’s recipe:

Shaken with ice and double strained into a chilled Martini glass.

It was quite pleasant. Very sweet, with the gin’s sweetness adding to the measure of syrup/maraschino in the cocktail already to add a big chunk of sugariness, but still nicely sour from the lemon juice and with some nice spice coming from the bitters. I also tried one with Plymouth and preferred the Viking – it had a bit more oomph.

Finally, I tried it in a Martini – 6 parts gin to 1 part dry vermouth, stirred with ice and strained into a chilled glass. On the nose it was quite savoury with a hint of brine – definitely a Martini to serve with an olive. The savouriness continues into the taste, with brine up front and some sweetness creeping in around the sides of the tongue and continuing to grow as the drink warms up. It finished with sweet juniper and spice (almost gingerbread-like), and some more olive brininess. I’d say it was a bit of a success – I like my Martinis quite savoury and this had enough extra sweetness to balance things out.

So, in conclusion – it’s not a light gin by any stretch of the imagination. Heavy, sweet and muddy but good in places were you can either use the sweetness to its advantage or lengthen it a bit to spread out the flavours. Now for the rest of World Gin Day…