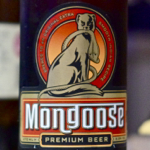 This is day one of “I’m crap” week. Occasionally friends of mine hand me interesting boozes that they have found and tell me that I should write about them. I, of course, accept these gifts but then, in a particularly crap way, don’t get round to writing about them. Today’s beverage is one of those and, to make things even worse, it’s the most recent and easiest to research of the bottles that I’ve been handed in recent times.

Anyways, throwers of awesome parties Neil & Jane thrust a bottle of beer into my hand at a BBQ this weekend with an instruction to write about it. The beer was Mongoose and this is some writing. From a quick look at the bottle you can see the market that Mongoose is trying to corner – curry beer. From its claim of an ‘Original Extra Smooth Indian Recipe’ to its use of a devanagari inspired font for its name it’s going all out to look Indian. However, a quick Google revealed that it’s nothing of the kind – it’s made by the folks at Wells & Young in Bedford.

It seems that Wells & Young launched the Mongoose Brewing Company Ltd as a joint venture with Gandhi Catering Supplies (purveyors of things that Indian restaurants want) to take on the likes of Kingfisher and Cobra. It looks like a tough ask, but they had an ace up their sleeves – Charles Wells, the company that merged with Youngs to form Wells & Young, is the brewer that designed the recipe for Cobra and brewed it under contract when it first appeared in the UK. Cobra no longer use Wells & Young for their brewing and have a new recipe, and as Wells & Young claim that the recipe was never deeded to Cobra they are now producing their own Cobra killer.  It’s fairly obvious where they’re going with their marketing – from the back of the bottle:

What could those enemies be? Maybe a cobra, like the one in the mouth of the mongoose on the front of the bottle…

Anyways, it’s got quite a dry nose without a lot of sweetness and this continues into the body – it’s quite mouthfilling and cereal-y, but without the sugariness you get in some curry house lagers. It’s not particularly fizzy, tying in with Cobra’s “it doesn’t fill you up” advertising campaigns of yore, and has a surprisingly hoppy finish (Hallertau and Hersbrucker according to the website) that almost covers a slightly buttery aftertaste. In the end it reminds me of Cobra but with a tad more flavour. A bit like it used to be…