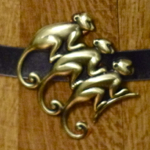 Monkey Shoulder is a blended malt whisky from Grant’s, made by combining whisky from Glenfiddich, Balvenie and Kininvie. While the first two are well known establishments the latter is more unknown. It’s not really a distillery, instead being a set of stills round the back of Balvenie, used to produce extra malt for blending. According to the ever reliable Johannes van der Heuvel’s Malt Madness they closed it down in 2010 in favour of their new (and huge) Ailsa Bay distillery. There have only been two single malt bottlings released from Kininvie, labelled as ‘Hazelwood’ and sold for silly sums of money through travel retail, and with its close I suspect that we won’t see it appearing as single malt at anything other than a silly price . I see this as being almost certainly the case as Grant’s like to teaspoon their whiskies to make sure that they can’t be sold as single malts – they add a little bit of whisky from one of their other distilleries to the cask when they sell them, making them no longer the product of one distillery. No floating around casks of Kininvie = no independent bottlings = no cheaper bottlings. Anyways, as of next year spirit from Ailsa Bay will start becoming whisky and us whisky geeks can switch our attention to whinging at Grant’s for a taste of that instead…

So, Monkey Shoulder. It’s been around since about 2006 and is another creation of Grant’s Malt Master David Stewart. It’s made up entirely of bourbon cask matured whisky (27 casks per batch, so the marketing goes) and is a mix of both young and old spirit further married in bourbon casks for 6-8 months.  The idea of the blend is to back up the light younger spirit with some older more flavoursome whisky to help it to stand out when mixed while staying fairly light and easy drinking – its place in the portfolio as a whisky for those who don’t usually like whisky and those who want to make whisky cocktails.

We were joined by brand ambassador/bartender Dean Callan and handler/madman Olivier Ward for a Whisky Squad with a difference – no blind tasting and only one whisky (well, two, but more of that later). The plan was to try a couple of cocktails and knock back a bit of Monkey Shoulder while chewing the fat with Dean and Olivier.

First up we passed around a bottle of Monkey Shoulder so we could see where we were starting from. On the nose it had butterscotch, popcorn, creamy grain, hints of lemon, sweet vanilla and honey. To taste it was soft and creamy with a bit of woody spice, lemon cream and malted milk biscuits. It finished with some dry wood, cinnamon and lemon rind, and faded to bitter wood. An easy drinking whisky without much complexity but enough flavour to make it one that is quite easy to knock back by the glass. As a few people around the room quickly realised. With the bottle still moving around the throng Dean moved onto the first cocktail of the evening, the Old Fashioned. Often considered to be the first cocktail, it’s as simple as they come – spirit, sugar, bitters, ice. It’s one of my standard cocktails and I already wrote a post about it way back in 2009 (my fifth post…) – since then I’ve played around with it much more and am always interested to see what other people do with the idea (as long as it doesn’t start with ‘muddling’ fruit in the bottom of a mixing glass). Normally Dean would build this in the glass it was to be served in, but as he was serving a lot of us he made up a batch to be poured individually. His recipe is, as hoped, simple – Monkey Shoulder, sugar syrup to taste (he’s one of the “don’t bother using a sugar cube soaked in bitters” crowd that I used to be part of – these days I use a cube smushed up with bitters to create a layered effect, as outlined in point 3 of this American Drink article), a couple of dashes of Angostura bitters, ice for stirring and some orange peel to garnish.

On the nose it was dominated by the orange oils from the garnish (expressed over the glass), but also had a bit of caramel and woody spice. To taste it was sweet (a bit sweet for my taste), with a malty edge from the whisky, soft cinnamon, brown sugar and some caramelised orange, finishing sweet and spicy. One of my big problems with whisky in cocktails is a jarring malt flavour that often appears when mixed. The way that I’ve found to round it out/hide it is by using bitters, the great flavour connector in many cocktails, and the Angostura here fulfil that task admirably, keeping everything together. Next was The Malt Jockey, a Monkey Shoulder twist on the Jockey Club, itself a Manhattan variant with maraschino added as a sweetening agent. The Malt Jockey’s recipe is: 50ml Monkey Shoulder, 25ml Sweet Red Vermouth (Dean is an Antica Formula fan, but something fairly heavy and sweet should work well), 5-10ml of Maraschino Liqueur (depending on how sweet you like the cocktail), 2 dashes of chocolate bitters (I think Dean used Fee Brothers, which are quite sweet); stir with ice, strain into a chilled glass and garnish with expressed orange peel.

On the nose the orange yet again dominated and it appeared on the palate as well, along with a woody edge and a rich whisky/vermouth mix with the herbal notes  and hint of chocolate from the vermouth accented. It finished with green herbs and a burst of unexpected chocolate from the bitters. Again it married well, with the chocolate bitters helping tie everything together but not being as much of an overt influence this time compared to other times that I’ve tried it. We then moved on to another Malt Jockey, this time tweaked by one of Dean’s current obsessions – barrel ageing. The small barrel was built by the coopers at Balvenie, having been chopped down from a retired cask to be a couple of litres in size. Dean filled the barrel with the regular recipe Malt Jockey back in February, giving it a couple of months of wooden influence before we got to taste it.

The wood had definitely had an effect, and tasting the two cocktails side by side it was obvious which was which – the aged version had a more malty nose and more bitterness on the palate along with a caramelised edge to the orange notes that hadn’t been there before. While the bitterness from the wood wasn’t a surprise, the softening and marrying of the flavours was something I hadn’t expected to have changed so much in a small amount of time – when playing with small casks you have to be really careful as the ratio of spirit to wood means that things happen fast. Next we switched back to whisky, with Dean pulling out a special bottle – Cask Strength Monkey Shoulder. He managed to get a few bottles pulled from one of the marrying casks before dilution and presented them, individually labelled with the recipients name, to a group of visitors he was showing around the distillery, making sure he got one himself. I suspect he has some sneaky refills at home, but it’s something that isn’t out in the wild and was exciting to have a taste of.

It was bottled at 58.5% rather than the regular 40% and the extra concentration really showed. On the nose there were Green herbs, anis, cinnamon, bitter clove, toast, sweet butter, orange zest, vanilla and floral hints. To taste it was soft despite the strength, with vanilla and big spice, lemon and orange. It finished quite long with a surprising tinge of violets and polished wood with a hint of floral Mister Sheen. Not what I expected and a whisky that I wish I had a bit more time to sit down and think about – I wish I knew where the floral notes came from as I’d jump on a whisky with them. I suspect it’s young Glenfiddich and hope it wasn’t the Kininvie… For a final drink Dean pulled out another experiment – New French Oak Aged Monkey Shoulder. While investigating the use of wood for cocktail maturation Dean had a small two litre new French Oak vat made up for him and about a month before the tasting had filled it with Monkey Shoulder ‘to see what would happen’. New oak can be very active and with a huge wood/spirit ratio compared to a full sized cask it was going to have had a big effect on the whisky, I just wasn’t sure what it would do.

On the nose it was rubbery with big pungent wood, lots of woody spice and a musky perfume. To taste there was masses of heavily perfumed wood and a ginger/rubber combination that reminded me of Adnams’s Spirit of Broadside – a distilled beer that they then matured for a year in new oak. It finished with sweet rubber and cheap fake chocolate. Overall I reckoned it was fairly awful as a drink, picking up all the overly woody and rubbery notes from the cask while avoiding the nicer elements that could have been added, apart from a little bit of extra spice. However, making tasty whisky wasn’t the point – I’ve now got a better idea of the flavours that new French oak imparts to a spirit.

And that was that. Many thanks to Dean and Olivier for looking after us and the Red Lion for having an excellent upstairs room.