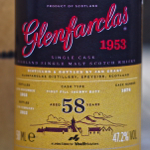 The whisky in question is the oldest ever to have been released by one of my favourite distilleries – The Glenfarclas 1953 58yo Cask #1674. One of the last four (although I’ve heard rumours that there may be more) casks remaining from that year, the oldest maturing stock remaining in their warehouses. Selected by Whisky Fun’s Serge Valentin, Master of Malt’s Ben Elleffsessen, George Grant of Glenfarclas and Michal Kowalski of Wealth Solutions, it was bottled in February of this year at 58 years old. Cask #1674 filled 400 bottles and is an American oak fino sherry cask, quite a different beast from the European oak oloroso casks that immediately spring to mind when sherry maturation is mentioned, and suitably its influence is not what you’d expect. Some tasting notes:

Nose: It starts peppery, even after 5 minutes of resting in the glass, with some underlying sour fruity notes – green plum and stewed rhubarb. There’s a lot of wood right up front, damp sawdust, fresh green wood and light pine, with sharp fruit and sweet vanilla poking their way through – Crème Brûlée with red currants? There’s also a touch of the dunnage warehouse – old wood and lingering spirit vapour. As it sits in the glass it develops both more sour wood and fruit as well as more vanilla sweetness and woody spice, remaining balanced.

Taste: Nowhere near as sweet as you might expect and heavy with savoury woody notes. Old green wood and damp dark wood start sour before becoming slightly sweeter (maybe as the tongue gets used to the flavour) with some pungent black tea leaves, perfumed wood, sharp red currants, some of the stewed rhubarb from the nose as well as crunchy green rhubarb, not too sweet apples and stewed gooseberries.

Finish: Long, as you’d hope from a whisky this old. It starts out with woody spice (hints of cinnamon and clove) before giving way to Granny Smith apples and more green rhubarb. The fresh fruit fades over a few minutes to leave a longer lingering dark wood note with some apple skin and gooseberry.

Despite being listed as a first fill sherry cask it doesn’t show many of the notes you’d expect from such a description. The combination of both fino sherry having been in the cask before the whisky and it being American oak seem to have given the spirit quite a different flavour to that matured in European sherry wood. Gone are the rich fruits, woody spice and sweetness, replaced by old wood sourness, vanillin sweetness and a very different range of rich but sour fruit. It’s certainly an impressive whisky, especially to have remained with so much fresh fruitiness even after almost six decades of maturation, not giving you what you might expect – it’s a pity that not many of the full sized bottles are going to get opened…

Outside of the taste of the whisky this is still a very interesting bottling for a number of reasons. Firstly, is the fact that it’s not a generally available release, having been bottled for WealthSolutions and secondly is its price – it’s listed on Master of Malt at £5995. Looking around I’ve found a few other 1953 vintage whiskies ranging in price from £500 for a scarily cheap (comparitively) G&M bottling of Glen Grant to over £10k for Macallan’s Fine & Rare from the year. One other whisky that stands out in the middle though is another Glenfarclas 1953.

Released 5 years ago, the only 1953 entry in Glenfarclas’s Family Casks range was matured in sherry butt 1678 and the tasting notes suggest something a little more like what we may expect from a European oak cask – ‘A rich whisky with a powerful sherry nose, followed by floral honey sweetness’. However, pricewise it’s around £1000. The new 1953 is 5 years older, it is one of the last four barrels from the year, especially important now that they’ve run out of 1952 casks to release as Family Casks, and it’s a very different beast to ‘regular’ sherried Glenfarclas. But even though I can intellectually accept all that the price still seems rather high.

Glenfarclas is a distillery well known for its reasonable prices. Their 40 year old is priced so as to be affordable with a single trip to a cash machine (~£300), making it the cheapest distillery bottling of its age on the website at work, and the rest of the range is similarly well priced – the Family Casks are more expensive, but they still don’t touch The Macallan’s Fine & Rare and other standard single cask distillery bottling ranges in expense. They don’t go overboard on their packaging – their malts from 10yo up to 40yo are packaged in the same shape bottle and in a similar tube, and the Family Casks get a slightly fancier cardboard box. The whisky is generally thought of as a drinker rather than one to invest in, whether it be the Family Casks or the occasional special editions that they produce from time to time. It’s at this point that I get confused.

Wealth Solutions are all about investment. From the book that comes with each bottle – “Wealth Solutions was established in 2007 with a mission to provide unique products for Polish collectors and investors”. So, what do we have here – a bottle of whisky priced at 6 times the value of its nearest comparable dram, from a distillery that is well known for producing good drinking whisky rather than investment. Throw in a more gussied up presentation than usual, complete with wooden box, a book penned by Ian Buxton (famously not a fan of investing in whisky) and tasting notes from Charlie Maclean and you have a very nice package. However, is it a good investment, the thing that the company who bought the cask claim to be looking for in their mission statement? It strikes me that it probably isn’t.

This seems to be another entry in the recent craze of investment whiskies at silly prices, although this time from a distillery that isn’t particularly known for doing such – Glenfarclas certainly isn’t Dalmore. I suspect that normally noone would have heard about it, and this kind if launch may happen all the time under the radar of the whisky geeks, but Master of Malt’s rather excellent hype machine launched into action and whisky people across the world found a bottle landing on the doormats. The problem with the silly prices is that the best investments are the whiskies that you buy for small amounts of money and which then go up in price due to market conditions – producing an expensive bottle specifically marked with the name of a luxury investment company strikes me as being the exact opposite of that. If in the end you want to put money into something that will keep its value as a fixed asset (the collector approach, which is one of Wealth Solutions markets) then I reckon the 1953 will be a good bet, but if you want it to be worth holding on to so you can buy a new yacht a few years down the line then I think you’ll be out of luck.

Then again, I’ll be happy to be proved wrong when a bottle of the 1953 sells for millions of pounds (or Euro, Yuan, Zloty or whatever we are using by then) in 20 years time. At least it will show me that my departure from the finance industry a year ago was probably for the best.

One Reply to “The Wealth Solutions Glenfarclas 1953 58 year old”