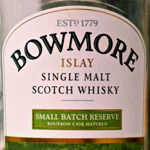 I love technology. Not only does it enable me to fire these words into other people’s brains without having to insert them manually, it also lets me find out stuff that I wouldn’t have otherwise. Much to my annoyance one of the best places to find out news and information about whisky these days is Facebook, and I spend an increasingly large amount of time keeping an eye on the Malt Maniacs and Whisky Exchange groups for tidbits that I might otherwise miss. It was on the latter that someone posted up a picture of a new Bowmore the other week, and after a moment of negotiation with m’colleague Tim we decided to split a bottle and I was dispatched to our local Asda. Bottle in hand I pinged a mail to DK, my friendly neighbourhood Morrison-Bowmore PR person, and she sent me back some information – it’s a new whisky that had been quietly released days before I grabbed mine: Bowmore Small Batch Reserve – Bourbon Cask Matured. I’ve had a bit of a love/hate relationship with Bowmore over the years. I used to love their heavily sherried Darkest but fell out of love with it; I hate one of their old ‘signature’ flavours – a big soapy, perfumed note that sometimes hints at parma violets and is commonly referred to as FWP amongst the whisky geeks – Flowery/French Whore Perfume; I’ve been lucky enough to try the famous White Bowmore which is fantastic; I’ve not been as impressed with their recent Tempest as m’colleagues; but after all of that I’ve really enjoyed occasional single cask bottlings and am alright with a hint of the floral. Recently I’ve started realising that I should give them another chance, rather than just avoiding their whisky on the off-chance it features an off-note, hence my chipping in for the bottle.

The whisky itself has no age statement and is matured in a mixture of first and refill bourbon casks. It’s intended to be a lighter whisky than many of their bottlings as well as an entry into the increasingly lucrative small batch/limited edition market. The press release talks about it being a “…genuine release of limited volume….” but doesn’t mention what that volume is, as well as hinting that it might be an ongoing bottling. The rumour on Facebook was that this might be a replacement for Legend, their current NAS 40% release, although as Legend was included in their recent packaging update I suspect this is exactly what it says it is on the label – a limited edition bottling and maybe the first a new series.

On the nose it has floral violets and candlewax, a hint of pot pourri/air freshener (but not enough to put me off), window sealant putty, sour tropical fruit, light muddy peat and a hint of pine needles. On the palate the pine needles come back, along with sweet peat, soft vanilla cream and a touch of parma violet. It finishes quite long, with floral smoke, and sour wood and fruit fading to a slightly cardboardy end.

Not a whisky to set the world on fire but a great slice of ‘this is what Bowmore is all about’. Hopefully this is just the start of a range of reasonably priced small batches – Sherry Cask Matured anyone?

Update: It seems that Bowmore have changed the name and given it a wider release – it’s now called Small Batch. Obviously ‘Reserve’ isn’t a good word…

While this probably spells the end of the constant special offers that meant it was normally very cheap in the supermarket, this should mean that we see more of it. I’m still waiting on a Small Batch Sherry Cask Matured, hopefully it’s in the works somewhere…