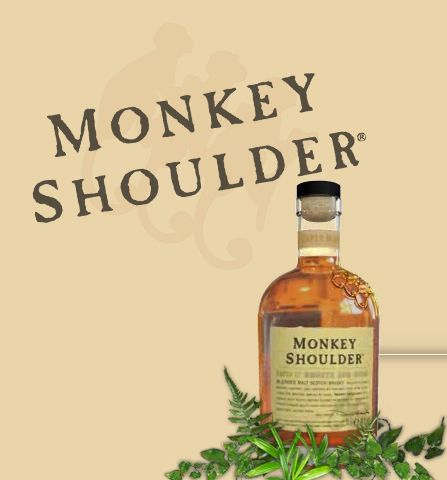 I like the folks at William Grant’s. Over the last few years they’ve been doing more and more interesting PR stuff, and this year’s focus for the crazy is Monkey Shoulder, their blended malt whisky. They kicked things off a couple of months back with some cocktail nights at Callooh Callay and event #2 is on this weekend – The Monkey Shoulder Chocolate Trail.

I’m not going to talk too much about the whisky as the folks from Monkey Shoulder are running the next Whisky Squad night, which I suspect I may be writing about shortly after, but as the Chocolate Trail is only open until Monday night I thought I’d get something up. Basically, they’re doing a pop-up cocktail shop just off Carnaby Street over the Easter weekend. They’ve set up a bar surrounded by greenery concealing painted eggs – punters are invited to find an egg and then swap it for a whisky cocktail and matched chocolate from Niko B. I popped in on Saturday for a chat with the folks and a couple of drinks. First up was a simple Ginger Monkey, mixing Monkey Shoulder with Fentiman’s ginger beer. It was matched with a burnt caramel and lemon chocolate, kicking in some sweet citrus and crunchy sugar to balance the spiciness of the drink. I followed that with a Malt Jockey, one of  Monkey Shoulder’s signature cocktails – a Manhattan twist with some chocolate bitters and an orange zest garnish. It was matched with a dark orange chocolate, contrasting the cocktail’s orange nose and chocolatey body with a chocolatey nose and orange body.

My third cocktail (I tried to leave but they wouldn’t let me) was one that I’d not tried before – a Rose and Rhubarb Julep. A simple Monkey Shoulder julep, with crushed ice, spanked mint and sugar syrup, dosed with some rose liqueur and a dash of rhubarb bitters. It’s an excellently sweet julep, with Turkish delight and sour rhubarb. It was matched with a lemon, ginger and cayenne truffle, a big flavour contrast that strengthened the elements of the whisky flavour that were hidden by the sweetness and floral notes of the cocktail: ginger and spice.

Anyways, they’re only there for a couple more days – if you’re knocking around Soho you should pop in for a quick cocktail. If you do make it, make sure you have a play on their musical chairs:

You can find full details on the Anonymous Artists webpage. They’re at 63 Broadwick Street and are open from midday to 7pm on Sunday 8th and Monday 9th April. If you miss it then keep an eye on Facebook and the internet – they’ve got lots more coming up this year.