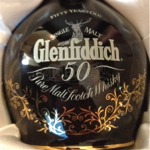 I haven’t posted about any single drams I’ve tasted recently, as in general I seem to do ‘proper tastings’ in flights or just not get around to writing about them. However, every now and again something comes along that’s a little bit special and deserves some extra attention – one of those popped up on the morning of the Saturday of Whisky Live. The night before Jonny McCormick, writer and chap who ran the World’s Most Collectible Whiskies masterclass at last year’s Whisky Live London, asked if I wanted to join in a little tasting the next day with Jamie Milne, Glenfiddich brand ambassador and the fellow IT industry escapee who convinced me to give Glenfiddich another try last year. It seems that Jonny and Jamie have been trying to get together and try a certain whisky for a while, and as there was just about enough in the miniature to split between two Jonny was wondering if I wanted some…

The whisky in question is the first release of Glenfiddich 50 year old, made by vatting together 9 casks from 1937 and 1939 with 500 full sized bottles filled on July 26 1991 – a time when Jamie was working as a tour guide at the distillery. They released a second version in 2009 but this was the first, one of the miniatures produced at the same time and sat around for 20 years before we got try to try it. It’s rather restrained for something quite so old and pricy. Apart from the silk lined box…


Miniatures aren’t well known for their seals and this one had most definitely had some evaporation, with the alcohol loss probably taking its the strength from its initial 43% to below the magic 40% limit to legally be whisky. However this is much more than just the liquid, it’s very much a slice of history. The casks were selected to honour the lives of distillery founder William Grant’s two children and the whisky in them was distilled during the years preceding the Second World War, with 1937 and 1939 coincidentally being often given as the starts of the war in Asia and Europe respectively. The style of whisky is very much different to Glenfiddich in modern times, with peat still being used to dry barley in those days, and this is by 1 year the oldest (by distillation date) whisky I’ve had the privilege of trying, beating the 70 year old Glenlivet from 1940 that I poured for a masterclass at last year’s Whisky Show.

Anyway, enough virtual fluffing – what did it taste like?

Nose: Ever changing in the glass – lots of layers. Elegant old wood, light marzipan, grassy fields, flower beds, glacé cherries and a hint of smoke, aged from pungency to a light muddiness.

Finish: Very light but long lasting – creamy wood and old polished floors slowly turning to a really tasty dark bitter wood with burned orange peel and orange oil. As the bitterness fades the light end of the polished wood and a little bit of fruit hangs around for even longer.

There’s not much more to say. It had obviously been open for a while, with a drop in the intensity of flavour and an increase in ‘dustiness’, but even so it was an impressive dram, reminding me of many of the old woody flavours I’ve found in older bottlings of whisky as well as the rounding of the flavour that bottle aging can achieve. On top of that the old style of the original spirit is something that yet again reminds me that looking for cheaper 70s bottlings is something I need to spend more time on: later in the day I had another taste of the Glen Garioch 1971 that TWE bottled last year, as well as their more recent 1978 bottling which brought home how much the styles of whisky have changed – the former was much more smoky (unlike the latter), but with that smoke gentrified by its years in wood.

The big problem with trying something like this is the realisation that there’s a good chance nothing like it is going to come your way again any time soon. At least one of us was dressed for the occasion. I also need to practice smiling.


Many thanks are due to Jamie Milne and Jonny McCormick. It looks like it’s my round until the end of time…

Glenfiddich 50 year old (1st Edition)
Speyside Single Malt Scotch Whisky, 43%. Price is whatever comes up at auction, but the last one I’ve found went for $38000 US ≈ £24000 for a 70cl bottle. This is now officially the most expensive whisky I’ve tried.