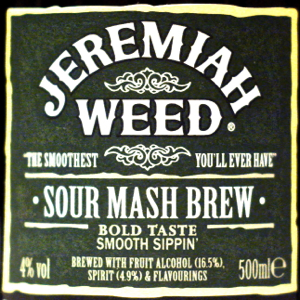 A question that noone has ever asked me, but I like to preemptively ask myself, is “Where do you get your ideas?” It’s an awful question and I dream of one day having to sigh and come up with an answer to tell the star-struck questioner, like the various writers and directors have had to when I’ve cornered them after a day of stalking. Currently the answer I plan on giving is “While walking the bleak aisles of the Park Royal Asda, searching for a bright ray of sunshine hidden behind generically packaged meat pies”.

While most of the reply is entirely false (Park Royal Asda is surprisingly unbleak for a soulless shopping shed on the edge of Europe’s biggest industrial estate, with friendly staff and an excellent range of produce. However, their meat pies are quite generically packaged) one part that isn’t is the core message – I do get many ideas for blog posts while walking around Asda, especially the beer and spirits aisle. The tales of gaudy booze pouches with easy sipping nozzles, excellent cans of mild and a range of port that I suspect indicates a hidden pocket of affluent residents nearby will wait for another time. Today I’m going to talk about Jeremiah Weed’s Sour Mash Brew.

The name of Jeremiah Weed is not unknown to me due to some of their other products that we managed to import from the USA at work. We used to have their infamous sweet tea flavoured bourbon, which is much beloved by the US Airforce and is fuel for their wild parties, according to a selection of the racier emails I received. Due to the vagaries of importing from the US in more recent times we haven’t been able to get it. Hence the emails. And further emails when we managed to get their sweet tea flavoured vodka, making sure we knew we obviously had bought the wrong stuff because why would anyone drink anything other than the USAF party juice?

So, when I came across this and its sibling, Roots Brew (ginger flavoured, rather than the root beer I feared), while wandering the halls of Asda I had to grab a bottle, for better or worse. I showed the folks at work and the general response was ‘Why would you do that?’ I put a picture up on Twitter questioning why I would drink it and received responses reiterating the question. I took it out of the fridge, opened it, poured it, took pictures of it and then tried it.

At first I poured it into a tall glass (as seen in the first picture I took) but after realising I actually quite liked it I decided to do a some research. With a little bit of digging I came across the signature serve for both this and the Roots Brew – over ice in a jam jar. Luckily I have a few jam jars knocking around (I like jam), including a few Four Roses branded ones specially made (or at least screen printed) for drinking out of. One of these was quickly dusted off, ice was sourced and my drink was complete. Using the right glass is important. It is. Really. Well, I think so…

I started writing notes, but there was a lingering hint of flavour recognition that I couldn’t put my finger on. A soft drink nose of fizzy cola bottles, crushed chalky refreshers, Ting, and lime cordial. All of that was in the taste as well as a bourbon-like sweet and spicy edge, and then the flash of remembrance hit – it’s a Lynchburg Lemonade, one of my favourite summer cocktails from my misspent youthful days of drinking in TGI Fridays: Jack Daniel’s, lemonade (7up/R Whites style) and lime cordial. The Sour Mash Brew is described as being ‘brewed with fruit alcohol, spirit and flavourings’ but I suspect that means it’s basically some young whiskey with alcoholic lemonade and some other citrusy goodness.

The ‘brewed’ side of things seems to be a hold over from its American roots as, as far as I know, the British style ‘add neutral spirit to fizze- up fruit flavoured liquid’ alco-pops aren’t legal on the other side of the pond, leading to all of their teenage fall-down juice being brewed to give them their boozey kick. I’ve tried a few hard lemonades and they’ve generally been a cut above the British Hooch and Mad Dogs, and I’m intrigued as to whether the Jeremiah Weed Brews for the UK are properly brewed malt beverages. I suspect they’re not.

However, production methods aside I was rather surprised as to how much I enjoyed the Sour Mash Brew. My only problem is the price – £2.20. It’s a fine drink but I thought I could make something almost exactly the same for a lot cheaper. Actually, I like numbers, so:

A total of £1.61 for 200ml, which scales up to £4.03 for the same amount as you get in a bottle, although at 10% ABV rather than the Sour Mash Brew’s 4%. If you stick with 50ml of JD and scale the other two ingredients up to make it up to 500ml you’ll get a 4% cocktail costing £1.70, which is not all that much cheaper than the ready made and will have less whiskey flavour. I might have to rethink this…