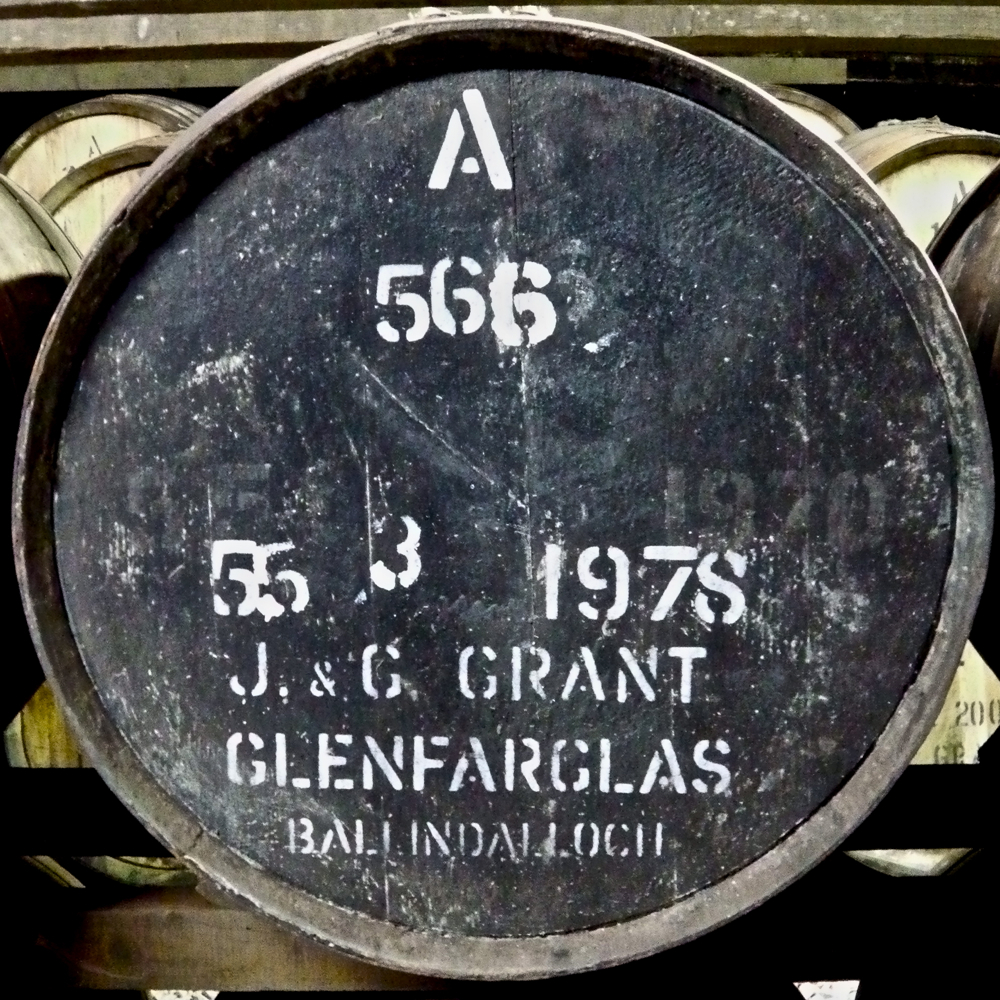 One of the things that people always said to me before I started working in the world of whisky was that everyone was friendly. Since I have started I’ve found that pretty much holds – the world of whisky is full of many lovely people. I met a bunch of them at Maltstock last year, including Jon Beach, king of drunken harmonica playing and hat wearing. When Jon heard that I was coming up to Scotland recently he ‘bullied’ me into accepting his hospitality at not only a Glenfarclas tasting at his bar, Fiddler’s in Drumnadrochit, but also by being driven around by him, his sister and his dad for a couple of days, taking in some of the booze related sites that I couldn’t get to by train. First on his list was the Glenfarclas distillery itself, just to make sure that it lived up to his high standards before the tasting… Jon, George Grant and the shiny pagoda’d entrance to the visitors centre

I’ve always had a soft spot for Glenfarclas. They’re first distillery I visited, at the age of 5, and one that I’ve almost always had a bottle from somewhere nearby. I’ve not visited in over 20 years so I was rather keen to see if a) I could remember what it was like and b) if it had changed much. The answers were simple – not really and I have no idea, but suspect not.

The distillery is in one of the most heavily populated areas of Speyside, distillery-wise, with Cragganmore a stone’s throw away, and Glenlivet, Glenallachie, Aberlour and the various distilleries of Dufftown a few minutes drive down the road. As with many of the older distilleries their history starts off with some illegal distilling, although they don’t know when the place was founded – they have a painting from 1791 showing the distillery in an operational state and records talking of two distilleries in the area in the 1780s, but the first solid date they have is 1836, the earliest documentation of a license to produce whisky. The Grant family bought the distillery in 1865 (for £511 and 19 shillings) and still own and operate it today – Chairman John Grant is the 5th generation and Sales Director/Brand Ambassador George Grant, who ran the tasting and showed us around the distillery, is the 6th, both still actively involved in the day to day operation of the company.

For one of the smaller players in the distilling industry they have a fairly large level of production, producing over 3 million litres of alcohol per year. They now buy in their malt (unpeated), having closed their floor maltings in 1971, and do a large 16.5T mash in a huge 10 metre diameter mash tun, which George thinks might be the largest in the industry. After mashing they ferment the wort for 3.5-4 days to produce a wash with restrained fruit and a lot of malt. They have three pairs of stills (the third set having been installed in 1973) to distill the wash, all six direct fired with gas. Even though the stills are designed with heavier bottoms to cope with the direct flame from the gas burners they still only last for about 25 years – at £130k+ per still it’s something you need to save up for. 60% of their spirit is filled into sherry casks, helping to produce the rich whisky that the distillery is known for, with the remaining 40% filled into what they call ‘plain’ casks – either ex-bourbon or fourth fill sherry casks (or earlier fills that are knackered), the latter no longer imparting enough of their traditional sherry character to be included in the sherried 60%. All of their spirit is matured onsite, with 29 warehouses and 55k casks with vintages from 1953 until the present day.

The tasting, a couple of days after the tour, was a run through their core range of whiskies, as well as a glimpse of their range of single cask ‘Family Casks’, as narrated by George Grant. George has been working in the whisky industry since his twenties, starting out at Inver House (so as to be able to ‘make my mistakes elsewhere’) and is now running around the world showing off Glenfarclas to anyone who sits still for long enough.

The Fiddlers wasn’t officially open yet, with the season officially starting in early March, but as part of the series that Jon runs for his Loch Ness Whisky Parliament tasting club (hopefully he’ll start writing the blog again soon…) he managed to get George in a couple of weeks before they opened the doors properly.

Fiddler’s opened in 1991 and the Beach family took over in the mid-1990s, turning it into a go-to place for whisky fans near to Loch Ness. The range of whisky is quite scary, with Jon’s own collection (including many Port Ellens, which he has worryingly encyclopedic knowledge of) and leftover bottles from the Parliament tastings occasionally crossing over with the bar stock to give some rare gems hiding on the shelves. We started off the tasting with Glenfarclas 15, bottled at 46%. George is a man full of stories (of varying levels of believability) and, as with almost every other whisky of the night, this one had an explanation behind it, especially the strength. The 15 year old appeared at a time when George’s grandfather was in charge and younger whisky was the norm. He went to do his yearly Christmas bottling for friends and family and discovered that when bottled at full strength the cask he’d chosen didn’t have enough to go around everyone. So, rather than opening another cask he decided to dilute the whisky, and, finding both 40% and 43% lacked the punch he was after, settled for 46%, which balanced his eye to thrift with keeping the whisky’s intensity of flavour. From that single cask the 15 year old was developed and the strength stayed the same – the rest of the range, other than cask strength bottlings and the 40 year old are bottled at 43%. On the nose the 15 year old had sugared raisins, honey and a big cinnamon spicy hit. To taste it was buttery with brown sugar, allspice, more cinnamon and the rest of the brown ground spices hiding at the back of the cupboard. It finished long, with sweet grapes, more spice, brown butter and the ever present cinnamon tingle.

Next was the Glenfarclas 21. On the nose it had caramel and raisins through the middle, with orange pith, the beginnings of old rancio, and forest aromas of bark, earth and damp leaves. To taste it was oily and sweet, with less complexity than the nose, zeroing in on brown sugar, stewed orange segments and lightly spiced syrup. The spice lingered into the finish along with a soft citrus tang. A drop of water opened out the body a bit, softening the syrup hit and bringing out more fruit, with apples, apricots and blackcurrant leaves, as well as a bit more crunchy caramel sweetness. A different style to the 15, looking more to the world of liqueurs than rich sherried whisky, but still along the same lines.

We then moved on to the Glenfarclas 25, a step back to the richly sherried style of the 15 – a nose of sweet dark sherry with a meaty edge, a hint of menthol, more rancio than the 21 and citrus tinged caramel. It was oily on the palate with honey, brown sugar, rich spice, butter and the direct nutty sweetness of white nougat. The flavours lingered into the finish, developing olive oil, orange and a slightly dusty cardboardy hint before it faded. A drop of water softened the taste a bit and brought out some lemon boiled sweets on the nose. Again quite sweet but backed up with more of the sherry spice and richness that Glenfarclas are known for.

Next to be poured was the Glenfarclas 30, until March 2010 the oldest entry in the regular lineup and described by someone in the room as ‘like Christmas cake, blended’. On the nose it had lemon oil, ginger bread, glacé cherries, and oranges studed with cloves, ready to mull wine. In the mouth it was, predictably after the last three drams, oily, with brown sugar, allspice, cinnamon, butter and elegant old polished wood. The wood continued into the finish, joined by a mouthful of woody spice – anis, cinnamon, clove…

The penultimate dram of the night was George’s baby – the Glenfarclas 40. Put out a couple of years back it has an RRP of £300, a number chosen, according to George, because it’s the most you can take out of a cash machine in one go. It’s bottled at 46% like the 15 year old rather than at a higher ‘cask strength’ so that it’s easier for them to keep producing it and keep it as a regular in the range – the first batch came out at 48% before dilution, so it’s not much of a drop. On the nose it had a mix of armagnac and bourbon – caramel, grapes, forest floor bracken, old brandy rancio, sticky cherries, orange, stewed raisins, nuts and a hint of Germolene. To taste it was slightly dusty, but backed up by big wood, raisins, creamy marzipan, cinnamon and long stewed apple. The finish was long, with big dark sweet wood, perfumed polished wood and bittersweet dark caramel. A dark old sherried number, but restrained and still elegant in its execution.

The final dram of the tasting was the Glenfarclas 1990 Family Cask Release V. The Family Casks are a range of single cask whiskies released in 8 tranches, so far, selected by the family and bottled at cask strength. They vary from old and intensely sherried whiskies to relatively young bourbon cask matured drams, the latter the sort of thing that you don’t often see from Glenfarclas – I tried one of their 1979 plain cask matured whiskies while at the distillery and it was stunning, although unlike anything I’ve tried from them before. This one came from a sherry butt and you could tell, with a big spicy nose of Bakewell Tarts, old wood, sweet oloroso sherry, sticky maraschino cherries (real ones, not the bright red cocktail cherries you normally see) and a savoury streak – brown sugar crusted ham, maybe? To taste it was hot and spicy, as you’d expect at cask strength, with intense cinnamon and fruit cake notes, as well as marzipan, salted caramel and black liquorice. The finish was woody, with bitter anis and polished oak, as well as a touch of sweet Turkish Delight. An impressive dram that shows what they can do with pure sherry cask whisky.

A few of us were staying over at Jon’s B&B over the road from Fiddlers and we hung around for a few post tasting drams. It may have been a slightly late night and I don’t remember all of the tasty things I tried, but Andy Simpson, of Whisky Highland, took a piccy that jogged my memory a bit – ta muchly chaps.

Many thanks to Jon for organising things and also his dad and sister, who took on chauffeur duties and got me not only around distilleries but also to the station early enough on a Sunday morning to catch my train home. Many pints/drams are owed.