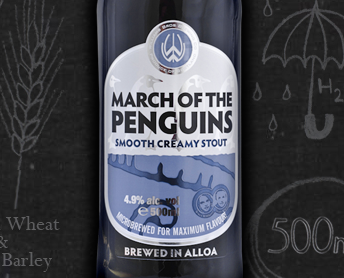 One of the things that always surprises me when I visit Aviemore is the range of tasty food and drink that I’ve been able to find. Local eateries notwithstanding the town has always had a good range of shops to find local produce that I can’t get at home that easily. Unfortunately that has been on the wane over my last few visits and this current one has shown the death of the last of the stalwarts at the hands of the behemoth over the road – the local butchers are no more, killed at the hand of the Tesco superstore over the road.

While Mr Tesco is not known that well for his caring and sharing nature (as recent news stories have brought up) he does have a love for buying from local producers as well as those in far away lands, which leads to the booze aisle of the store having a rather good selection. The whisky section is adequate but the beer range is really quite good. They don’t have any of the localest of local beers, brewed 10 minutes walk away at the Cairngorm Brewery (more posts about them to follow once I try the latest pair of beers I picked up from them – I tried the rest of their range last time I was up here), but they do have a bunch of brews from Scotland, including beer from Brewdog, Black Isle, Orkney and Williams Brothers. It’s a beer from the latter of that list that I’m writing about today. I’d tried most of the five or six beers that they had from Williams but there was one that I’d not seen before – March of the Penguins. With my recent beer consumption generally clumping around the strong, hoppy, golden end of the spectrum I thought that a ‘mere’ 4.9% creamy stout would do as an emergency tipple to keep in the fridge.

The back of the bottle is typically terse, explaining that it is ‘A silky smooth stout brewed with a blend of chocolate malt and roasted barley combined with lovely hop aromas and a spicy fruity finish’. While I was intrigued about their usage of commas in the sentence, with my ill-advised punctuation fetish meaning that I would, probably incorrectly, insert at least one if not two more, the ingredients list was also interesting:

No mention of the, I assume, unmalted roasted barley from the description and three more ingredients that I hadn’t expected – wheat, coriander and orange zest.

It poured as dark as you’d expect, revealing a reddish tinge if held up to the (admittedly cloud covered on the day that I tried it) Scottish sun, with a lot more fizz than I expected. On the nose it had chocolate malt burnt notes, as well as some stouty creaminess, coffee grounds, and a hint of fizzy citrus. To taste it was quite fizzy, thinning the beer out somewhat, with an upfront burst of CO2 sourness, which faded quickly to leave a slightly sour milky middle, backed up by dark chocolate and coffee, and rounded with a bit of coriander. The stoutiness fades away and the aftertaste is quite light, although it’s an unexpected (without reading the ingredients list) tinge of dark chocolate orange, which hangs around nicely for a while.

So, all in all a fairly tasty beer – a creamy stout with restrained use of spice and fruit to add another dimension.

2 Replies to “Williams Bros – March of the Penguins”