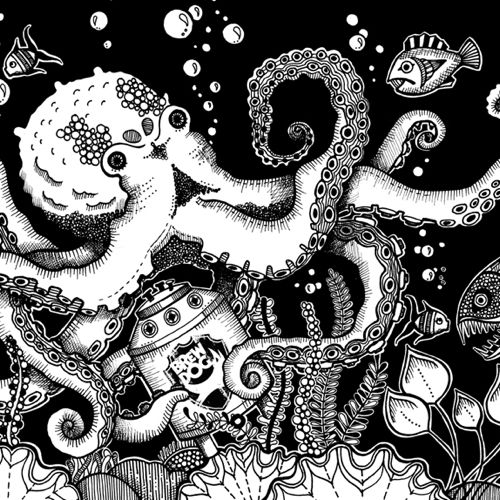 As a Brewdog shareholder I get notifications of when their new beers appear, which combined with my acquisitive need to collect ALL THINGS is a dangerous situation. After a recent beer parcel arrived I reorganised my beer cupboard, having realised that I’d foolishly stored a bunch of bottles on their sides, with sediment collecting elsewhere than at the bottom and the potential of catastrophic cap failure significantly higher than it should be, and did a head count: 20 different Brewdog beers, including a brace of Sunk Punk.

One thing you can definitely accuse Brewdog of is playing with beer. From the high strength Sink the Bismarck and the crazy packaged End of History and Ghost Deer to the recipe tweaking of the Abstrakts and IPA is Dead series, they like to do things which are both silly and interesting and Sunk Punk is no different. In short – it was brewed underwater. There is, of course, a framing story, with tales of a fisherman cursed to wander the waves forever due to his drinking habits, but the idea for the beer was simple – fill a fermenter with the ingredients, get it going and then kick it off the end of a pier. There is, naturally, a blog post and video:

Recipe-wise it’s infused with sea buckthorn, and contains some fresh sea salt made from local sea water (based on the amount you can see James shaking into the wort in the video above, which I guesstimate at two 250g boxes of the poncey salt I cook with, and a sea water salinity of 3.5%, the middle of Wikipedia’s range, they would have needed to distill 14kg of water, which is much less than my cynical ‘they bought it in the supermarket’ thinking mind thought before starting this set of parentheses) and rum (added while wearing an eyepatch).

While I often get a bit ranty about booze packaging generally I give Brewdog a bit of free pass, in part because of labels like the one on this bottle. It’s a beautiful bit of black and white work by the excellent Johanna Basford, who also did the art for the Bashah Reserve that I have maturing on the side as well as several other Brewdog beers and a few t-shirts. I am tempted to perfect the art of removing labels intact and use this one to start a scrap book. She also sells prints (and has a Christmas shop) and I have some blank walls…

However, that is all secondary – what’s the beer like? On the nose it was very vegetal, with the usual Brewdog hoppiness, but very green – piles of fresh leaves, a hint of mulch, a bit of the ‘swampiness’ that I ranted on about recently as being the key ingredient of the old King & Barnes Sussex’s flavour. Balancing out the green-ness was a bit of malt and toffee sweetness and some, potentially psychosomatic, brine. To taste it was disappointingly flat, with sour green hops, some digestive biscuit malt and a bit of pineapple sweetening it up towards a very bitter end. All in all a disappointment – a not particularly interesting tasting beer with an overly bitter finish that hung around a little bit too long. At £10 a bottle it’s not cheap and unfortunately isn’t one that I’d count as a success. Ho hum, roll on the next marketing gimmick…