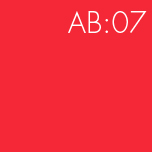 [As a brief editorial warning, it seems that things are going to be a bit beer heavy around here for a bit. I like beer and forgot to drink any for a while. I have started to remedy this]

The vast majority of the beers I drink at the moment seem to be from Brewdog. The reason is simple – I don’t get the chance to go down the pub very often and I have a not inconsiderable stash from the Fraserburgh trouble-stirrers in the cupboard.  Unfortunately I’m an idiot and I recently found a stash of nice hoppy beers that really hadn’t survived their time in the bottle all that well, and as such I’ve decided to get through and drink a bunch of them rather than let them go all skunky.

However, in true contrary fashion this first one that I’m going to write about isn’t one of those, it’s a beer designed to sit and age – AB:07, the seventh release in the Abstrakt range.

I’ve written about a few of the Abstrakts on here before (so far only missing 1 and 5), but I’ve never actually bought a bottle. To make up for this I’ve recently become a member of Brewdog’s Abstrakt Addicts club and while that doesn’t kick in until the new year (securing me 3 bottles of each of the next year’s predicted 4 releases) I thought I’d better start off with the most recent one.

The Abstrakt series is a range of one-off beers, made in smallish quantities and discontinued after release. Some of the ideas get recycled into other Brewdog releases, but in general they’re high strength brews that are suited for bottle aging with interesting tweaks that make them a bit weird. AB:04 had coffee, chilli and chocolate in; AB:05 had toasted coconut; AB:06 was triple dry hopped; and AB:07 is a whisky cask aged Imperial Scotch Ale clocking in at an impressive 12.5%. The beer was brewed on December 21st 2010 and was filled into some whisky casks where it sat until early September 2011, when it was tanked ready for bottling. Their blog post from the day has more details, but it’s one of the least hopped beers they’ve ever made at 30IBUs (partly inspired by being snowed in and having their hop delivery delayed), which they made up for by packing in as much malt as possible… I’ve not always been that much of a fan of the Abstrakts that I’ve tried, but they are always at least interesting. This one, strangely, is both my favourite and the most ‘boring’. On the nose it was like sniffing a vat of liquid black treacle toffee – sweet, pungent and with a hint of balsamic vinegar and Worcester sauce sourness. As it warmed up from fridge temperature it picked up some sticky dried cherry and lots of booze. To taste it was more of the treacle toffee, with a nice burst of coffee bitterness into the finish. As it warmed up it got thicker and richer, with some red wine and port fruitiness as well as fruit cake coming in with the balsamic and treacle. It’s a big dark beer, reminding me a lot of the Orkney Dark Island Special Reserve that I had last Christmas (and which I need to get some more of for this year), which will hopefully mellow out and get stickier and fruitier over the next couple of years. My plan for my remaining bottle is to drink it at New Year 2012/2013 – if it’s anything like the Orkney after a year and a bit in the bottle it should be fantastic.