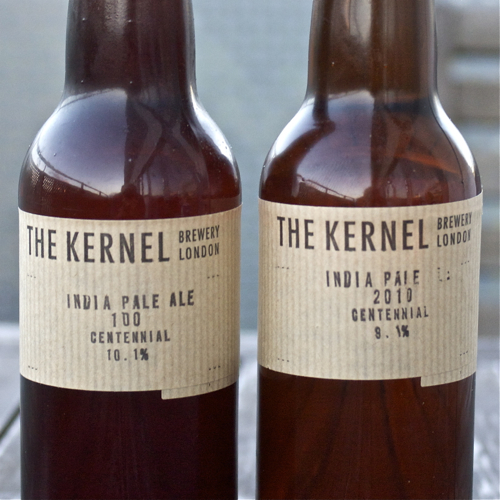 It’s been way too long since I’ve visited The Kernel Brewery. I wrote about them after visiting last summer and then didn’t make it down again until a couple of months back, at which point I carefully restocked with a ‘few’ bottles of beer. A pair that caught my eye were both head brewer Evin’s ‘standard’ IPA brewed with Centennial hops. While that’s an interesting enough prospect as it is, this pair were quite special for other reasons as well: the first was brewed last year and the other is their 100th brew. With the potential for celebration of one of my favourite brewer’s landmarks, the opportunity to see how things have changed over a year and the brewery’s regular promise of some tasty beverage I couldn’t really say no.

Centennial is a New World hop, grown in the USA and bred in the 1970s by crossing a variety of British and continental European hops before it appeared on the brewing scene in the 1990s. It’s a multipurpose hop with medium-high alpha acid concentration (the main bittering agent within the hop) and a citrus/floral characteristic, and it is used as both a bittering and aroma hop, providing American beers with some of their distinctive bite for the last 20 years. Happily in the modern world of brewing it’s fairly easy (if there’s any left after the post-harvest auctions) to get American hops in the UK and lots of brewers have been playing with overseas produce (with the USA and New Zealand being the two that I’ve heard most about) for a while.

The Kernel’s IPA is one of my favourite beers of the last few years, no matter what hop is in it. I need to grab a bunch and do some more side by side comparisons (a bit like with BrewDog’s IPA is Dead collection) but for now trying the ‘same’ beer a year apart will happily do. Evin’s recipes are tweaked and fiddled with as he plays with ingredients and these two are definitely not the same beer, with the 100 coming in at 10.1% and the 2010 at 9.1%. I started off by tasting the 100, brewed in May this year. It had Kernel’s usual chunk of sediment and I left it upright in the fridge for a few days to settle out, before leaving it to warm up a little bit before pouring – not too much, as I do like my big IPAs with some chill on them. On the nose it had damp and mulchy foliage with a big pungent green-ness, concentrated bitter orange, grapefruit and the tiniest hint of balsamic vinegar. To taste there was more of the orange and grapefruit from the nose, backed up by blackberries, strong tea, green leaves and a tasty sour bitterness running through the middle – green hops and dark stout-like maltiness. Another tasty IPA from Kernel and yet another hop variety to add to my ‘taste more of this’ list. I then moved on to the 2010, aged (I assume in the bottle) since last year and with a big puck of sediment at the bottom – I was advised to keep it in the fridge for a while to settle out when I bought it, and the couple of weeks it sat there seem to have help me pour it cleanly. On the nose it was pungent again, like the 100, but without quite so much oomph – hoppiness does seem to sometimes disappear as beer ages (as a few foolishly ‘kept for a special occasion’ IPAs have taught me) and this may have been hit by that. However, this one had much more fruitiness, with red berries, sweet cherry and blackcurrants in the mix, as well as a quick whiff of stale armpit that didn’t detract too much from the rest. To taste the fruit jumped out again, with blackberries sitting around in the middle and turning towards sour berries as the flavour petered out. It started comparatively light, with malty Digestive biscuits and bitter orange, with hints of lemon and grapefruit popping up, as well as a nice almost gueuze-like sourness. A quite different beer, with the hops being more subdued than the 100 (although still as in-your-face as you’d expect from a Kernel IPA) and being replaced by big fruit. I don’t know whether that’s the effect of the aging or whether it’s just that Evin’s been tweaking the recipe in favour of a more hop led-approach over the year, but I was intrigued to see how it had changed.

Anyways, writing this reminds me that I need to stock up on beer. With my most recent BrewDog order left with a neighbour I don’t know (and who doesn’t live at the address given on the ‘Sorry you were out!’ card) my stocks are running low and despite the lure of whisky as the temperature drops, I have central heating and a fridge that will be running anyway, so a nicely chilled IPA is something I will be sampling in the cold months to come.