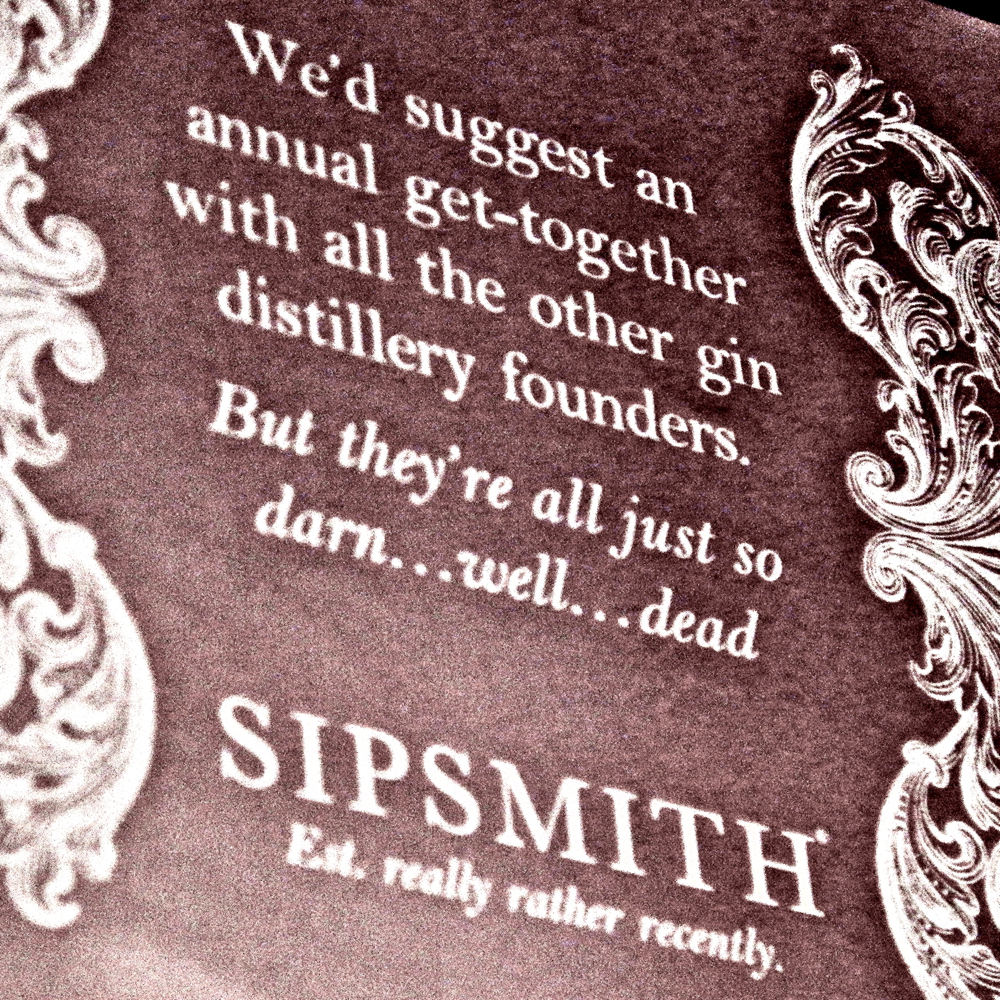 I’ve been much remiss when it comes to writing about Sipsmith, in as much as I haven’t really done so yet. I first realised that they existed when they supplied a stack of gin and vodka to the Blaggers’ Banquet, back in November 2009, the event that inspired me to start writing this blog. Since then I’ve visited the distillery a couple of times (first in May 2010, according to the email I just searched for) and have bumped into the folks from the distillery on numerous occasions. However, for one reason or another I’ve never actually done more that gushing about how lovely they are at people I meet in the street. So, to finally do that which I should have done before here’s some witterings about Sipsmith.

The distillery was started in 2009 by Sam Galsworthy and Fairfax Hall, formerly Fuller’s and Diageo reps in the USA, with writer and drinks historian Jared Brown coming in as master distiller and recipe guy. They bought a garage in Hammersmith (formerly owned, it turned out, by legendary beer writer Michael Jackson before he died), obtained (through a scary amount of effort) the first new distilling license for a copper pot still in London for 189 years, filled the garage with a beautiful 300l still made by Christian Carl that they named Prudence (after one of Gordon Brown’s favourite traits, so the story goes) and started making gin and vodka. They don’t do it alone, though – they also have a nice chap called Chris who does the day to day distilling. So, between the three of them, Jared being an occasional visitor, they produce a large amount of booze, the increasing quantity of which Sam seems genuinely shocked about.

Their production process is quite simple – obtain barley based spirit and redistill it. If they’re making vodka that’s it, but if they’re gin-ing then they add the botanicals to the still and leave them to macerate overnight (if I remember correctly – there is a distinct hole in my notebook where my notes from my first visit to the distillery should be) before redistilling. Both vodka and gin are brought down to their bottling strengths of 40% and 41.6% respectively using water from Lydwell Spring, the current source of the Thames up in the Cotswolds, adding yet another London-y string to their bow. However, my most recent encounter with Sam, Fairfax and Jared was for a slightly different reason – it was to do with fruit. Last year they produced a sloe gin for the first time, starting with 10kg of sloes in May 2010 for experimentation and then moving swiftly up to a first batch using half a tonne. Rather unromantically they matured it in the black drums that their barley spirit is delivered in, but on release it flew off the shelves. This year they decided to up the stakes a bit and went for 4 tonnes, a lot but not quite in the league of Plymouth and their 50 tonnes per year. Like the chaps from Plymouth they couldn’t be doing with pricking all the sloes so took the ‘cheating’ route of freezing them for 3 days to cause the skins to burst (a technique that seems to have varying levels of effectiveness in the home), before adding them to a high proof version of their gin, to aid flavour extraction, along with a small amount of sugar to help the process along. I tried last year’s and it was rather good – sticky, sweet and with enough of the original gin flavour coming through to let you know that it’s ‘proper’ sloe gin.

This year, however, they decided to add a couple of new things to their range. Sitting in the no-man’s land between released and not is their Fruit Cup, a Pimm’s like beverage that’s meant to beat the market leader hands down for taste, and a damson vodka – the reason for my recent visit to the distillery. I was invited along to their late launch party (we’re already selling it at work, so I hope they did a few more) and rocked up to their convenient-for-my-office-and-home distillery to be greeted by a hot garage with some smelly cheese from La Cave à Fromage, some grub from The Ginger Pig, a pile of London drinks folk and a bar manned by Jared and Graphic‘s Adam Smithson. The focus of the evening was to have a bit of a party, drink some drinks and judge a competition. The week before I had been sent a bag of sloes by PR queen Rose McCullough to use to make some kind of interesting recipe to bring along to the party – the best recipe using the supplied sloes or damsons would win a mixed case of boozes and the never ending respect of our peers. Unfortunately I ended up drunk in The Netherlands at Maltstock and singularly failed to make anything. I have since pricked all 2lbs of sloes and stuck them in bottles with varying amounts of gin and sugar, but that’s a story for another day. Anyways, the winner was Ailbhe of Simple Splendiferous who made a rather impressive Damson relish, just pipping Becca of How to Make a Mess‘s sloe syrup to the prize. Anyways, enough food – drink.

I managed to get a bit of the Damson Vodka on its own, but most of the evening was focused around cocktails. While it does work well as an ingredient I think a bit more time spent on the vodka as a drink in its own right wouldn’t have gone amiss, as it was rather nice. On the nose it was very reminiscent of a Sloe Gin but with a bit more of a jammy edge – red fruit, plasticine, sticky boiled sweets, a hint of sourness and a heavy underlying richness. To taste it was as thick and sticky as you’d expect from a fruity liqueur, but was definitely not sloe gin – cherry jam, hints of prune, old ruby port and a buttery finish. It doesn’t quite have the complexity of the sloe gin, but it does have a lot of excellent fruit and is one that I wouldn’t mind sipping. Cocktail-wise we started off with a Damson Royale – Damson vodka topped up with champagne, as with a Kir Royale. I’m not the biggest fan of champagne, but this did exactly what Kir Royale’s do – champagne with the edge rounded of thanks to some sweet and sour fruitiness. As the evening moved on some cognac started getting added for a bit more buttery fruit. With the damson vodka falling behind on number of cocktail recipes Jared and Adam did a bit of on the fly creation and put together a combination of damson vodka, gin, champagne and amaretto, that worked rather well and was speculatively christened ‘Damson on the Fly‘.

The sloe gin was a bit more established with two solid cocktails – the Blackthorn and the Blackthorn No.4. The former is a simple mix of 2-1 sloe gin to sweet vermouth that I suspect I will trying when my maturing sloe gin is ready. The No.4 was much more interesting – a combination of equal measure of sloe gin, Jameson whiskey, gin and, according to the recipe, amontillado, although I’m fairly sure they were using La Gitana manzanilla instead. Either way it was a great cocktail, with the sloes providing sticky fruit, the gin a punch and some aromatics, the whiskey a warm buttery base and the amontillado a bit of dry astringency. One that I will definitely be trying around Christmas time and a perfect excuse to buy even more sherry.

Anyways, as you might be able to tell I rather like the Sipsmith folks. Luckily they do produce good stuff (although their vodka recently got a bit of a thumbs down on the Bitters & Twisted blog) which I rather like drinking (although my house gin is still Tanqueray – I need to do another vertical gin tasting to try and see beyond the brands and kickstart my rubbish gin flavour memory) so I feel slightly less of a shill when I write a fairly glowing piece such as the above. However, their enthusiasm for making tasty boozes rubs off on you after a few minutes at the distillery or even just having a chat in Waitrose (one of the more random places I’ve bumped into Sam: doing a ‘Try my gin’ stand at the Westfield branch – it’s not often you see a company’s co-founder handing out samples of their booze on a Saturday afternoon down the supermarket). Long may they continue.