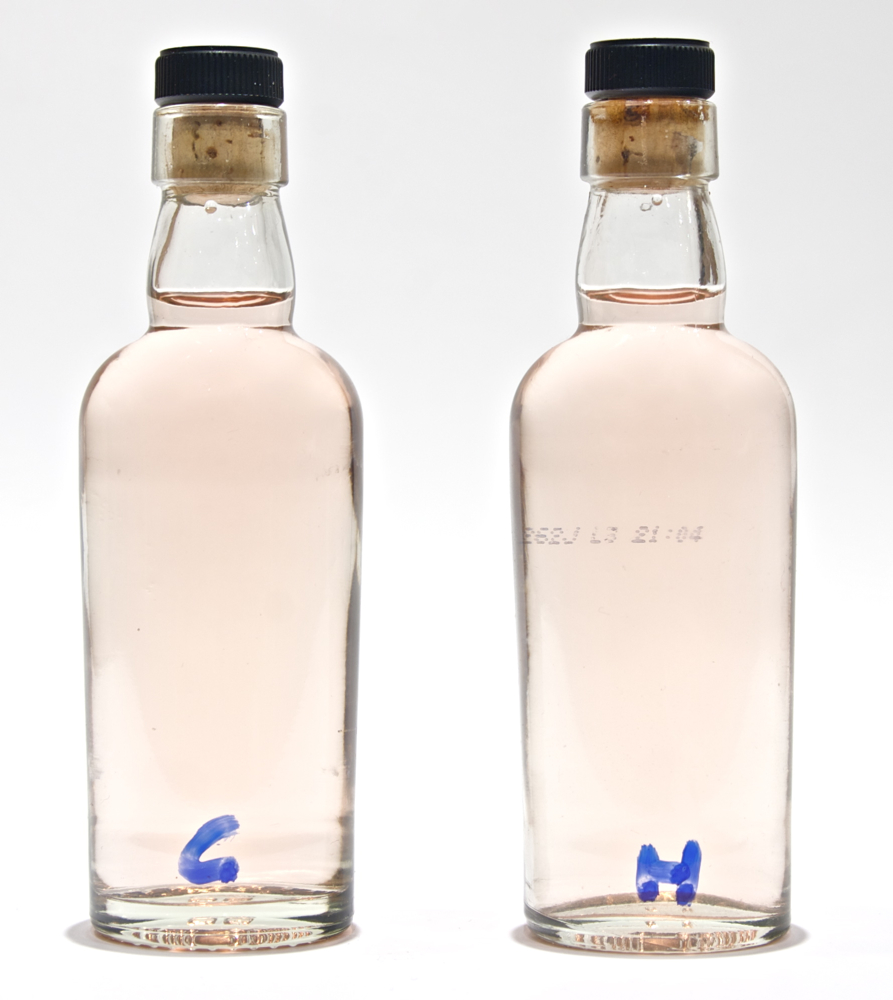 Outside of drinking interesting booze I’m also rather interested in making it. However, lacking both license and equipment to distill and the patience to brew at home I’m currently sticking with the joys of flavouring spirits. I’ve done a few vodka based experiments (with the liquorice vodka being a repeated success which never lasts very long) but after discussing flavour extraction with the chaps at Hawksmoor (where the horseradish gin in the bloody marys is rather nice) and trying Bob Bob Ricard’s rhubarb G&T I decided to try making rhubarb gin.

However, my two sources had different ideas on how to make it – the guys at Hawksmoor suggested trying a cold infusion while they heat it at BBR. In the interests of SCIENCE! I decided to do half a batch of each and do a simple infusion, no added sugar or other seasonings.

The recipe is simple – 300g rhubarb, chopped into inch lengths, 300ml Beefeater gin. For the cold infusion I placed the rhubarb and gin into a bowl, covered it with clingfilm and left it on the side for 2 days. For the warm I placed rhubarb and gin in a saucepan, warmed until just before the alcohol started to vaporise, covered with a lid wrapped in silver foil, to ensure an airtight seal, and then left overnight.

The times used for each weren’t entirely random – I tasted the warm infusion gin after a night of soaking and it was suitably rhubarby, so decanted it. I left the cold infused one until it was about the same colour and rhubarbiness as the warm one. All brutally clinical and scientific… As you can see from the picture, they don’t vary much in colour and if it wasn’t for the labelling of the bottles I suspect I wouldn’t have been able to tell the difference from sight alone. However, the taste is markedly different.

The warm infused gin has a good rhubarb smell and taste, although it tends to the more familiar end of the rhubarb spectrum – stewed. The flavour is also quite distinct from the gin – at first you get a hit of rhubarb but it is followed by the botanicals of the gin. It’s quite heavy on the sweet and sourness and made me think of a crumble with the topping removed.

The cold infused gin is a bit lighter on the nose, with a slight greenness (as you might expect from raw rhubarb). To taste it has much more, with a combined fresh rhubarb and gin flavour that almost crunches as you drink. It captures the essence of raw rhubarb very well, with a delicate sweet and sourness.

To continue the SCIENCE! I made a couple of gin and tonics. The cold infused gin was crisp and sour but along with the tonic it was a bit bitter. The warm infused gin’s more stewed flavour worked well with the tonic, giving a more rounded and tasty drink, quite similar to the BBR cocktail.

To finish things off I made myself a slightly more BBR style G&T, although with some sugar syrup rather than adding sugar at the infusion stage and proportions made up by me – 1 part gin, 3 parts tonic, 1/2 part simple syrup. I didn’t get the foamy head of my first visit to BBR, but I did get a rather nice sweet and sour gin and tonic.

So, all in all two different and fairly tasty bevvies. The warm infused gin worked much better in a G&T, but the cold one was very good on its own (scarily sippable for gin, especially served with an ice cube). I suspect this will not be a one off experiment…