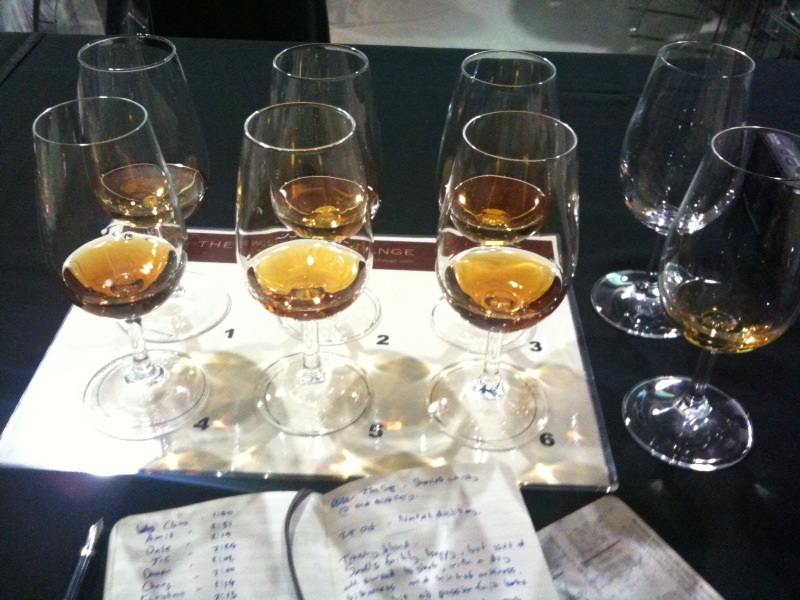 Another month, another interesting tasting at The Whisky Exchange. The main difference this time is that I was actually able to attend rather than gallivanting around in places that weren’t the deepest depths of Vinopolis (which seems to get bigger every time I visit). This month it was the turn of Aberlour, with the tasting led by Phil Huckle, the Chivas brand ambassador who did the Chivas tasting I attended earlier this month.

Aberlour is a Speyside whisky famed for its heavy use of sherry barrels, using them for complete maturation rather than just finishes. Unlike the way that Macallan traditionally operated they do also use bourbon barrels and their standard expressions are 50/50 mixes of bourbon and sherry cask matured whiskies, but there’s still a lot more sherry here than you will often see. The distillery was founded in 1879 by James Fleming, who became well known in Aberlour for his philanthropy, investing heavily in the local community and helping to build up the area. However, this fame was only after his death, as his involvement with his various was made under strict secrecy. The village of Aberlour seems to be more fully known as Charlestown of Aberlour, although the first bit seems to be generally missed out these days, and sits between Grantown and Elgin, in the heart of Speyside. The distillery is part of the Pernod-Ricard portfolio (hence Phil doing the tasting) and while not that well known in the UK is one of the top selling whiskies in the world, topping the charts in the biggest single malt market in the world – France.

First on the tasting mat we had a whisky unavailable in the UK – the Aberlour 10yr old Sherry Cask, a 100% sherry matured whisky that is on sale in France. On the nose it had red fruit, salt and some woody hazelnuts. To taste it was quite different with a caramel sweetness and oak, digestive biscuits, wax and a hint of mint. Water killed a lot of the sweetness, brought out more of the wood and softened some of it into vanilla. A nice sherried Speyside with a lot of the traditional flavours of the region and a distinctive edge to the nose that I am still trying to describe – almost bbq sauce and cold grilled chicken, but not quite…

Next up we had the regular Aberlour 10yr, 50/50 sherry and bourbon casks, and a good way of seeing how the bourbon cask matured whisky affects the sherried whisky. On the nose it was sweeter than the last, with more light sugar, as well as the sherrylike dried fruit. It also had the distinctive bbq chicken smell that I mentioned before, nuts and a chunk of damp sherry barrel. To taste there was waxed wood obscuring some of the fruit and a soft spiciness. There was also a perfumed flavour not unlike Mr Sheen but, to quote Anna, in a good way. Water added creaminess and bitter oak while dropping a lot of the perfume and starting sweetness, but pushing some dried fruit to the finish. A rounded dram that definitely improves on the raw sherry cask by bringing in some of the lighter bourbon barrel influence.

Next was the Aberlour 12yr, another 50/50 mix with a noticeably deeper bronzey gold hue. On the nose it was quite different to the earlier ones, with a savoury edge, sour cherries and an underlying meatiness. To taste it was quite creamy leading to sweet berries, spice and a woody finish. It also had a cooling menthol flavour that dried the edges of the tongue. Water made it chewier with more cream, vanilla, woody spice, dried fruit and a dry stony ‘granite’ flavour. Definitely developed from the 10yr, there’s quite a bit more complexity to this one and a drop of water really opens it up.

We then moved on to what Phil predicted would be the star of the night, even if not his personal favourite – The A’bunadh. Meaning ‘origin’ in gaelic, it is a no age statement whisky (although generally made up of 8-15 year old whiskies with occasional younger additions) designed with the idea of recreating a victorian style – fully sherried due to the non-availability of bourbon casks in those times. It’s unchillfiltered and contains no caramel, the first of which, at least, is not true about the rest of the range, and is released in small batches, each numbered, which vary in flavour – we tried batch 30, the most recent one, which has just started hitting the shelves. On the nose there was the regular distinctive Aberlour-ness, although not quite so pronounced as usual, masked by sherried fruit, glace cherries and creamy creme brulee. In the mouth it was oily and exploded with nutmeg. Once you got over that (and there was a lot of nutmeg) there was honey and a long spicy finish, with more nutmeg. Water, and it can take a lot, calmed things down a bit, bringing out chocolate on the nose and a chocolate milkshake creaminess to the body. There was more fruit and spice as well as a tannic woody finish. In the middle it quite reminded me of lardy cake, which reminds me – I need to find a supplier of lardy cake… Phil was right – this was definitely the star of the show for me, especially as I can grab it at my local (posh) supermarket.

Next was the Aberlour 16yr, continuing the standard range with a slightly darker colour and evolution of flavour. On the nose it had the normal bbq chicken woodiness but it was very light, with much more in the way of grapes, caraway, red fruit and a hint of butteriness – like something a lot closer to new make spirit than something that’s been in the barrel for a decade and a half. To taste it was very creamy, with sweet vanilla complimented by bitter wood, red grapes and mint, with a tannic finish. Water brought out vanilla to go with the cream, a lemony zing and cinnamon. Not what I expected at all, a much lighter flavoured and more zingy dram.

The last on the mat was the Aberlour 18yr, a deep reddy gold dram that almost rivalled the darkness of the A’bunadh. On the nose it had fruit, heavy cream, prickly spice and the bbq chickeny wood that I now expected. To taste it was quite soft, with creamy wood and a dry toasted wood finish. The middle was filled with apples and pears with cinnamon, along with the toasted finish it was almost like drinking apple pie. Water knocked out the complexity very quickly, giving rise to icing sugar sweetness, vanilla wood and leaving a touch of apple. Phil’s favourite of the evening and well appreciated by many in the room, this was interesting but a bit light for my, by this time, rather deadened palate. Definitely one to try again.

As a special treat Phil also managed to dig up a couple of more rare whiskies to round off the night, first of which was an Aberlour 23yr old single bourbon cask bottling, distilled in 1985 and one of the single casks that you can pick up at the distillery itself (although this one is probably now finished). On the nose this was light with apples, cream and freshly cut oak trees. To taste it was creamy with more apples, wood, vanilla and some hints of spice and nuts – like a very light fruit cake. Water seemed to intensify things, with it becoming apple pie and cream, with a cereal hint pointing to pastry. It was still very lightly flavoured and a hint of citrus helped it along to a woody finish. A beautiful light dram and one that you can imagine taming some of the sherry punch of the 10yr sherry cask and A’bunadh into something more approaching the regular house style.

Last of the evening was a cask sample of 26 year old sherry cask, at cask strength. Being only a small sample there wasn’t quite enough to go round, leading to a quiz with correctly called out answers earning a generous dram. Fortunately my attendance and remembering things from the earlier Chivas Regal tasting helped out, with my correctly identified home city of the Chivas brothers grocery store (Aberdeen) winning me a slug of deep golden spirit. On the nose it was quite overpowering with toffee apples and sulphorous wood, and tasting it was an eye-watering experience with the alcoholic strength backed up with strong flavours of caramel, toast and wood. It was powerfully tannic, taking your breath away and leaving the tongue drying, but it also had quite a hollow taste, with almost everything happening on the front, back and edges of the tongue, with a gap in the center. Water, and as expected it could take a lot, calmed things down, bringing out leather, salt, caramel and softer tannins, with a hint of rubber running down the middle. An interesting whisky but one that shows more what using a sherry cask for too long can do rather than one that you’ll want to drink a lot of.

An interesting tasting, despite my not being won over by the regular range. Finally having got a taste of the A’bunadh I can see why it was recommended as an alternative to the now increasingly scarce Yamazaki Sherry Cask that I served at my last whisky tasting – it has the rich sherried flavours, but also more wood than the Yamazaki, which becomes interesting when you add water. I also saw quite how far into the more overpowering ends of the flavour spectrum things can go, with the 26 year old cask sample being too much for even my sherry loving tastes, blasting through my fatigued palate and definitely ending my chances of tasting anything else – the comment I made about it on connosr was that it was like “being hit in the face with an oar after rowing over a lake of sherry”. However, I suspect a bottle of the A’bunadh will be appearing on my shelf soon enough.

One Reply to “Aberlour tasting at The Whisky Exchange”