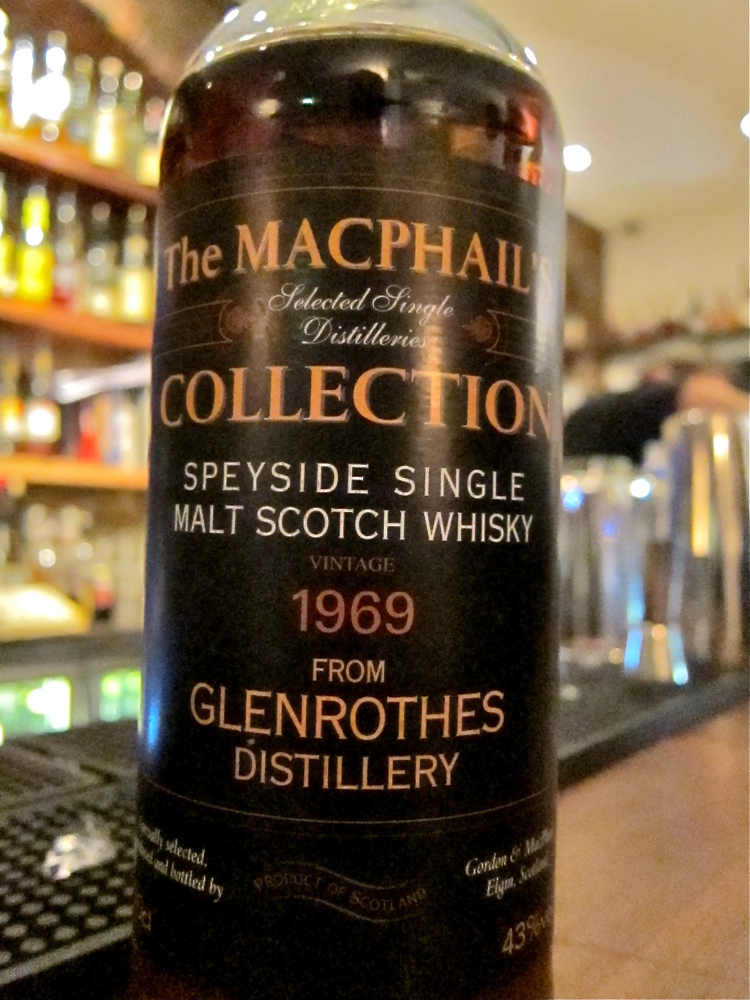 Well overdue with this, so here is a not so quick list of quickish descriptions:

The MacPhail Collection 1969 Glenrothes. I grabbed a tiny taste of this at Hawksmoor while I was visiting to try out the ice ball machine. 39 years old and a recent acquisition, it’s much loved by the bar staff and they wondered if I’d agree. I did. Vanilla and spicy wood on the nose with struck matches, salty caramel and pepper in the mouth. Water softened the wood into vanilla and brought a background of charcoal. Tasty.

Blanton’s Single Barrel – Barrel 153. A 65% cask strength bourbon. I was chatting with the Hawksmoor bar staff about whiskey, having had a shot of George T Stagg (one of my most favourite whiskies, which there will be a post about sometime soon), and they ‘forced’ a taster of this on me. A bourbon that I was not that much of a fan of when I got a bottle for my birthday a few years back, this reminded me of the good elements of that bottle – prickly and perfumed on the nose, it tasted spicy and woody with a weird astringency not unlike PVA glue. A drop of water added a stack of vanilla. A rather complex and interesting whiskey, more savoury than most bourbons I’ve tried.

Port Charlotte PC7. One on the ‘find and try’ list for a while, this is from Bruichladdich‘s ‘other’ distillery. On the nose it was salty with mulching seaweed, which developed in the mouth to a citrusy charcoal burst and a buttery mouth feel. A drop of water piled on more smoke and a strange salty sweatiness. Impressive.

Horseradish gin. Not one on the menu on its own, but this is the base for Hawksmoor’s new brunch menu‘s drinky centre piece – a bloody mary. They make theirs (the ‘original’ way) with gin, and infuse a large jar of Beefeater with thumb sized chunks of horseradish to make an interesting starting point for the drink. The horseradish smooths out the bumps in the normally fairly rough Beefeater and adds a beautiful spicy warmth to the flavour. I’m off to buy some bottles, gin and a chunk of horseradish later today so I can make my own – I assume it’ll be great in a bloody mary, but it also tastes nice on its own.

1800 Anejo Tequila. Cactus based booze is definitely on my list this year (especially after speaking to Johan Svensson about agarve tequila recently) and I grabbed a shot of the second cheapest anejo that The Texas Embassy sell while abusing their free chips and salsa policy the other week. It had the classic salt and pepper tequila smell but was a chunk more complex to taste. A woody centre with fruitiness turning bitter on the finish. It burnt on the way down and after it had gone left drying tannins that turned to vanilla. Interesting and a place for me to start from. Marble Chocolate Marble. A present left for me by Alan after my whisky tasting the other week, this is the produce of the Marble Arch brewpub in Manchester. I was meant to be up there this weekend and had already planned a 20 minute dash into the pub to buy some more of their beer, but unfortunately had to cancel my trip. The Chocolate Marble is excellently chocolatey, despite not containing any chocolate as far as I can tell. Stout-ish, as it says on the bottle, bitter-sweet and mouth filling, it may well be my favourite bottled beer I’ve had in a while.

Hop Back Taiphoon. The first of my birthday present beers (thanks Dad!) to disappear down my throat. It’s a weird one this, with a lemongrassy tinge that makes it taste more like a shandy than a regular beer, but with a dry malty aftertaste rather than the sweetness you’d expect. I’m still not sure about it and suspect I need to try another…