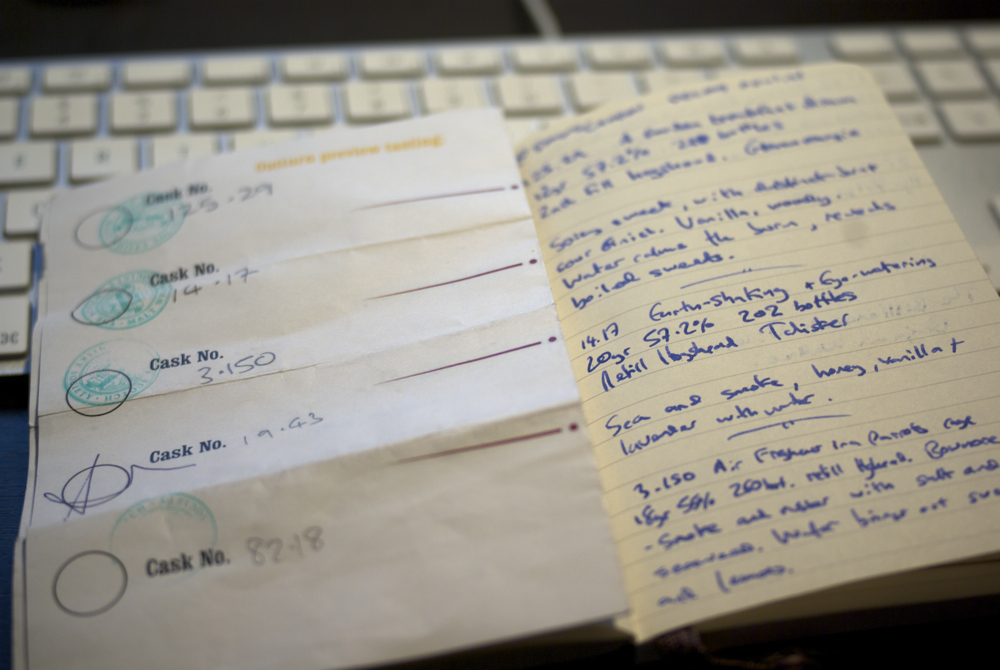 A while back I bumped into Laissez Fare at a wine tasting and I quickly admitted that I didn’t really have much of an idea about wine. However, in an effort to pull back my boozey reputation, I started rambling about the Scotch Malt Whisky Society, my tongue slightly loosened by the magic voodoo wine that we had been tasting, and he mentioned that he wouldn’t mind learning some more about whisky. I promptly forgot about this until last month’s Blaggers’ Banquet, when I both briefly bumped into Mr L-F again as well as going on about my love of scotch at great length at Mark of FoodByMark, who also expressed an interest in learning more.

And thus was a plan formed.

Each month on the first Friday the SMWS release a number of new whiskies, and in order to promote them they do an open tasting on the Wednesday before. Despite having been a member for a couple of years I’ve never made it along to any of their tastings, so with Christmas approaching, my whisky cupboard emptying and two whisky neophytes expressing an interest I thought it was time to change the state of affairs. So, with a friend of L-F, who happens to work with a bunch of my former uni-mates, which was quite random, the four of us assembled at the SMWS for some whisky.

The society open tastings are very informal affairs. Basically, you turn up as usual at the tasting rooms but are given a piece of paper (as seen in the above piccy) on which you write down which whiskies you’d like. You give it to the bar staff and they then give you whisky, and at some point in time a big plate of cheese. This appeals to me on a number of levels. Rather than filling in the list all in one go and letting the bar staff tell us which order we should be drinking things in, we went for the more reactive route of choosing things and then trying to find things less or more strongly flavoured from there on.

A quick word about the SMWS – they select individual casks from the various distilleries (not all in Scotland – I need to return shortly and try a couple of drams from Yamazaki and Hakushu in Japan. The Hakushu looked especially interesting, coming out of the bottle almost black and with a stickiness that intrigued me) and then bottle and sell them at cask strength. They don’t attach a distillery name to their bottles, instead using a numbering scheme of distillery.caskNumber – for example the 125.29 that I started the evening on. While they don’t officially provide a list of which distillery matches up with which number the staff know and there are a few places on the web where you can grab a list (including my own rather simple page that I Instapaper‘d onto my iPhone). The official reason is that the distilleries don’t want their names to be directly associated with these potentially very different expressions which might change expectations of their stock whiskies. The real reason seems to be that it adds a layer of mystery and exclusivity. I like mystery and exclusivity.

As mentioned, I started off with a 125.29 – a Glenmorangie. There are only 126 malt distilleries on the societies list, so Glenmorangie is a fairly recent addition. I’ve seen a few since I joined, including the bottle I received when I did, but haven’t tried any of them. Being a fan of standard production Glenmorangie (and a satisfied visitor to their distillery), I thought I’d kick off the evening with it. It was pretty much what I expected – a straight down the line, medium-full bodied highland whisky. From my notes: Spicy sweet, but with a distiinct burnt sour finish. Vanilla and wood. Water calms the burn, reveals boiled sweets. It was a nice start to the evening – not heavy enough to break my palate so early, but also not overly light. A good solid dram.

I then moved on to a probably ill advised choice, but with my preference generally being towards the heavier whiskies one that made sense – 14.17, a Talisker. As can be seen by the low distillery number and low cask number (they are both assigned in order) the society doesn’t get many whiskies from Talisker and being a fan I’ve been waiting for one since I joined. From my notes: Sea and smoke. Honey, vanilla and lavender with water. Short and to the point – this is very much a Talisker, with the hints of the sea and slab of smoke that implies. It had a chunk of smooth sweetness behind that as well, with honey joining the normal woody vanilla. A very tasty dram. I chatted with one of the barman about it and he expressed his disappointment, a sentiment I can understand – with so few whiskies appearing from Talisker he had expected something very special. As it was he, and I, just got a very good whisky – nothing different or special, just a tasty dram. Disappointing but in a good way.

With the whiskies clocking in at full cask strength, 57.2% for each of my first drams, it was decided that maybe a break for some dinner would be a good plan. The SMWS London rooms get their food from The Bleeding Heart, which they conveniently sit above. The Bleeding Heart is known for being a rather good restaurant and the SMWS bar food satisfies their reputation. My companions had fish & chips and burgers but I decided to go for one of the smaller dishes – a ham hock scotch egg with homemade piccalilli. I’m only a recent convert to the joys of piccalilli but am a bit of a scotch egg obsessive, eating them as a standard snack as well as seeking out special ones (such as the excellent ones produced by Andy of EatMyPies that I grab on a weekly basis from Whitecross Street market). This was up with the best – a tasty ham hock coating, with firmly adhered breading (my only complaint about Andy’s) and a slightly runny egg. The piccalilli was an excellent accompaniment, just sharp enough to cut through the egg as well as being tasty to eat on its own with a spoon…

On to dram 3 – 3.150, a Bowmore. Bowmore are one of my favourite distillers – they know what they do well and keep doing it well. They do big smoky, sweet whiskies with a fairly big kick to the teeth. However, the description on this one suggested it was non-typical so I though it deserved a try. From my notes: Smoke and rubber with salt and seaweed. Water brings out sweetness and lemons. The big difference here was the saltiness – there was a distinct slab of the sea-saltiness that I really love in whiskies and this ticked all the boxes. A touch of water opened it up, adding a citrusy flavour that I hadn’t expected and that worked rather well.

Swiftly on to my next – 19.43, Glen Garioch. I tried the standard production Glen Garioch (pronounced ‘Glen Geery’ according to the website) a few years back when I picked it up on offer while passing through Heathrow (the presence of a branch of World of Whiskies in the terminal may influence my choice of airline…) and it was a fairly boring but tasty highland whisky. The description of this one intrigued me and it was definitely not what I expected. From my notes: Sweet and spicy with linseed oil, salt and a touch of smoke. Rather than the normal spicy sweetness I expected I got a rather complicated whisky with distinct layers of flavour – normal sweet and spicy leading into a spicy oily centre taste and trailing off with a whiff of smoke. Not my favourite of the night, but definitely interesting and one that I may have to try again.

At this point our cheese appeared. The society does branch out a bit from whisky, with bourbon, port, sherry, brandy and wine all appearing on the menu, but they also know how to choose a cheese. We had a cheddar, a heavily smoked, a goat, a runny sheep and a blue cheese. Being a cheese wuss I avoided the blue and tried and disliked the goat, but the other three were quite excellent and definitely a good thing to protect us from further whisky consumption.

Onto my final dram of the night – 82.18, a Glencadam. I chose this one based on a sniff of one of my companions’ drams and the description, and I’m happy I did. I’ve not tried anything from Glencadam before and only knew the name as one on the list of distilleries that the SMWS bottles from. From my notes: Thick caramel sweetness with a centrepiece of rubber. Water dulls the intensity but leaves the flavours almost intact. This was good. For a fan of sweet whiskies as well as rubbery ones this came in as almost my perfect whisky. Only my already very heavy bag stopped me from grabbing a bottle on the spot (the cheapest of all the ones I’d tried, at £40) and I suspect that I will be returning to the society soon to grab a bottle, hoping that the Talisker and Glenmorangie will distract everyone long enough that it won’t sell out.

Anyway, a successful trip and something that I may have to repeat. All I need is drinking buddies…

SMWS New List December 2009 Open tasting – members tickets £25, non-members £35. Includes five 25ml drams of whisky from the new list (2 days before everyone else gets to try them) and a plate of cheese.