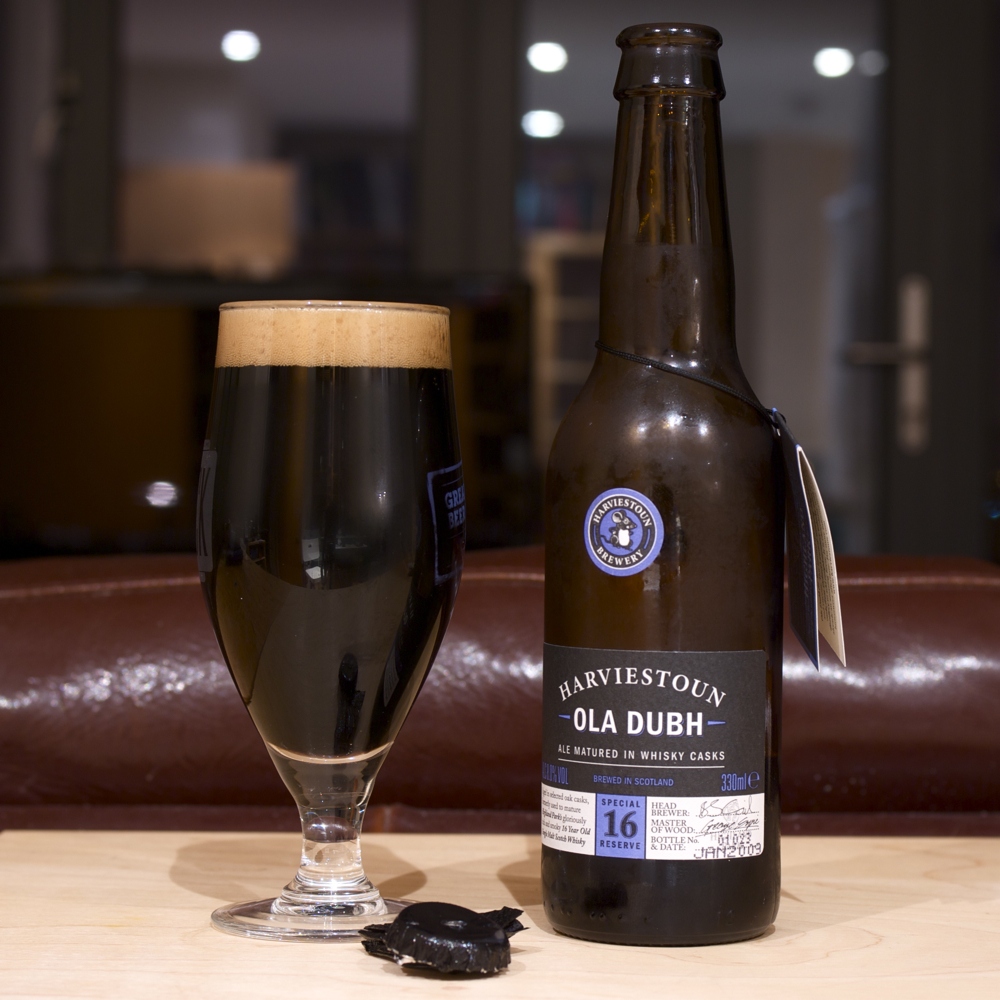 Being a whisky fan as well as a lover of scottish beer (of which there are increasingly more and more good examples of) this jumped out when I heard it was appearing – a Harviestoun beer matured in casks that had previously held Highland Park whisky. The SMWS got a few bottles in for general consumption, as I missed out on a ticket for their tasting, but they only had the “basic” Special Reserve 12, matured in casks that had held 12 year old whisky. Finally, after hints of the existence of the older casked beers (and an offer to negotiate for the sale of a couple of bottles from one of the lovely barmen at The Draft House) I found some at Utobeer this weekend and grabbed one – the Harviestoun Old Dubh 16 Special Reserve:

I may have grinned a lot on the way home as I’d picked it up for only £4, a chunk less than I thought I’d pay for the most exclusive of their releases, and managed to hold off on its sampling for a couple of days. The beer that they mature in the barrels is similar to the Harviestoun Old Engine Oil (Ola Dubh is allegedly scots for Black Oil), a thick black beer that lives up to its name, and it comes out the other end of the process with a definite change. There’s not the big I WAS MATURED IN A WHISKY BARREL kick that you get from Innis & Gunn, but there is definitely a sweetening influence over the flavour of the Old Engine Oil.

The beer is thick and dark with a malty sweetness and slight smokiness. It’s strong, at 8%, but doesn’t taste it, slipping down worryingly easy, but it has that strong bottled beer catch at the back of your throat. The head in the picture is a bit deceptive as the beer is only slightly fizzy, with a stout like bubble, and quite silky in the mouth. Overall though it doesn’t do much more than the 12 year cask matured version, which from memory I think tasted very much like this. It’s quite a tasty beer, but not one that I’d go out of my way for over the 12 year or a regular Old Engine Oil.

However, on checking the round-the-bottle-neck booklet it seems that my guesses on the editions of the beer were wrong – they offer a 12, 16 and 18 (although the website suggests the 18 has been discontinued in favour of a 30, which has been added to the watchlist). The omission of the 14 fooled me into thinking I had the highest cask age beer, but it seems that there is at least one further for me to find. Never mind, it’s quite an enjoyable search.