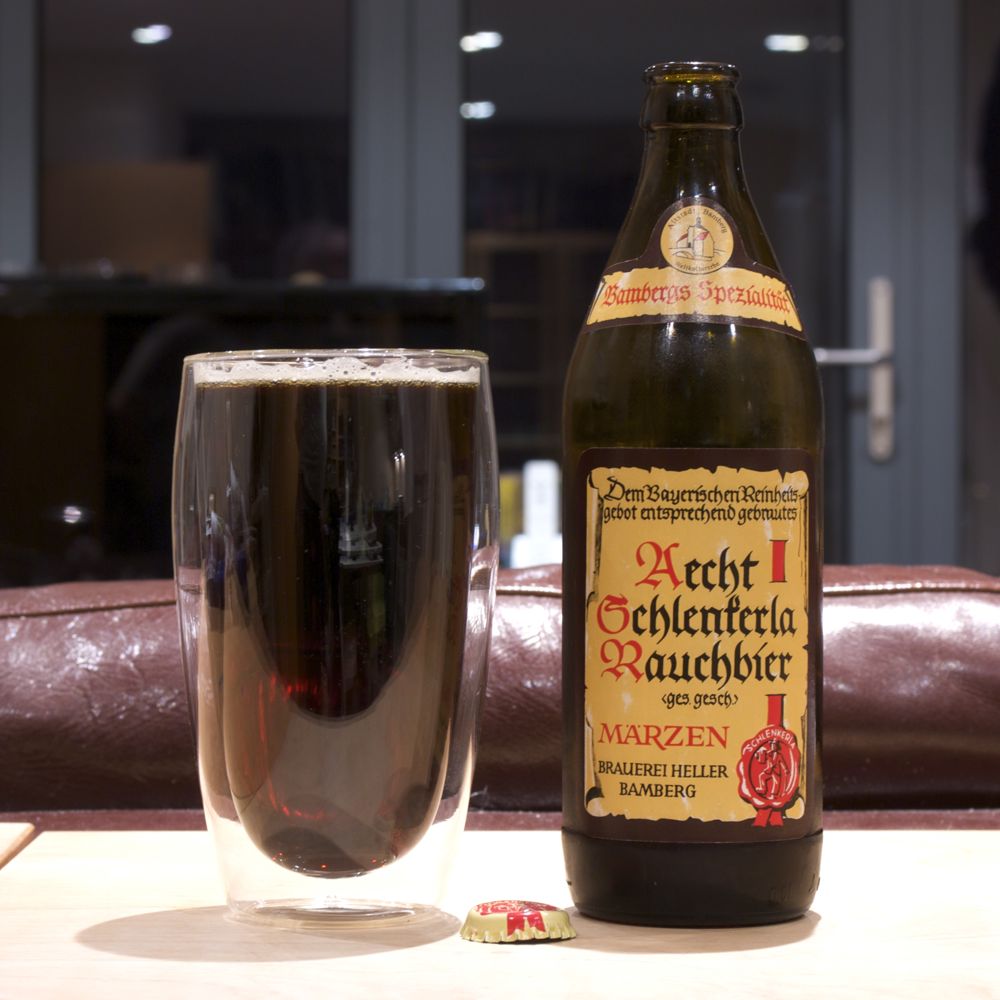 There are certain beers that I have quite serious troubles describing. “It’s like a regular Fuller’s beer but with porridge in” (Fuller’s Red Fox), “It’s like a glass of really hard water, Soda Streamed with the finest bubbles ever created and then magically turned into a lightly flavoured lager” (Kasteel Cru), “It’s like someone has shoved a spike up your arse, tied your lips together and then punched you in the stomach” (Dogfish Head 120minute IPA), “It’s like someone has dipped an apron string in some shit and drawn it across the back of your tongue” (A pint of very off £1 a pint beer at a Wetherspoons in Hexham) – these are beers I have successfully described, to some extent. However, I still have troubles with this one – Schlenkerla Rauchbier:

As with many of the random mainland European beers that I’ve tried, I first found this at a beer festival, with it being jammed into my hands by a very enthusiastic chap at the Ealing Beer on Broadway festival a few years back. I’d heard of rauchbier from some of my more continentally versed compatriots and was keen to try the mystical ‘bacon beer’ that they described.

The beer is brewed in Bamberg in Germany by the Brauerei Heller, although my looking online suggests that most people simply refer to them as the Schlenkerla brewery after their brewpub in the centre of town. The beer’s distinctly smoky flavour comes from the smoked malt, dried over open fires burning beech logs. They have three varieties of smoked beer, also serving a weizen and a bock, as well as an unsmoked helles (which I tried by accident this year at the GBBF – it was rather nice, with a hint of smokiness to it that Wikipedia informs me is due to the brewing process happening in a building surrounded by smoky malt), although the Aecht Rauchbier is the only one that I’ve found in the UK with any regularity. The smoking of the malt used to be a side-effect of the drying process, before kiln drying took over in those places where drying the malt in the sun was not quite as regularly possible as needed, and Bamberg is one of the last places that use the flavour as the distinguishing mark of the local beers.

Flavour-wise it’s quite an eye opener – a dark, lightly carbonated beer that is quickly overwhelmed by flavours of woodsmoke. The smokiness lingers and tends, in my opinion, more to the sweet end of things with hints of sweetcorn in addition to smoked ham and maltiness. It’s definitely more savoury over all, but with a vanilla edge at the back of the tongue. The thing that surprises me most is its lightness – while it’s not a crisp lightly flavoured drink, it’s definitely lighter than the heavily smoked smell and flavour at first suggest. It reminds me of the crispness of Asahi Black and some of the flavour of Budvar Dark with a can of corn (drained) blended in. I suspect that with its strong flavour but lightness it’d compliment food well, adding a distinct extra element to similar flavours in stews and casseroles heavy enough to battle the smokiness. Just the sort of thing they serve in The Schlenkerla in Bamberg…

I found it on tap at this year’s GBBF, after my accidental grabbing of the Helles, and while it wasn’t poured from an oak barrel as it is in Bamberg it was fantastic – less fizzy and thus with a slightly thicker and heavier taste. Both my drinking buddy and his dad took home beermats with my drunkenly scrawled “Schlenkerla” on, promising that it was on their list of things to keep in the fridge. It’s most definitely not for everyone and not one for all night (unless you’re in Bamberg), but as an occasional treat it’s filling, tasty and strangely moreish.

Aecht Shlenkerla Rauchbier
Smoked beer from Bamberg. 5.1%
Available from specialist beer shops and some branches of Tesco – list available on their website
I got mine from Utobeer in Borough Market